Coming home from Canada I met a cattleman who was up there for the Angus Association meeting.  During our conversation, he commented he had met with Sec. Vilsack.  I asked him what his impression was.

His reply: "I'm a Democrat, but I tell ya, this guy is focused on food - not farmers."

I think he's right, especially given this development:

The Obama administration announced Monday that it would seek to ban many routine uses of antibiotics in farm animals in hopes of reducing the spread of dangerous bacteria in humans. In written testimony to the House Rules Committee, Dr. Joshua Sharfstein, principal deputy commissioner of food and drugs, said feeding antibiotics to healthy chickens, pigs and cattle — done to encourage rapid growth — should cease. And Dr. Sharfstein said farmers should no longer be able to use antibiotics in animals without the supervision of a veterinarian. [More]

To be fair, opposing prophylactic antibiotic feeding is not in itself contrary to farmers - we're consumers too.  But I'm guessing cattle feeders will see it as a burden.  Personally I think it's a contributor to gain rates we could do without, and enhance the safety perception of our meats.

The question is if this will extend to ionophores.

Caught in the discussion of antibiotic resistance is the prophylactic use of antimicrobials as growth promotants in food animals. Included in this scrutiny are ionophores (such as monensin, lasalocid, laidlomycin, salinomycin and narasin) — antimicrobial compounds fed to ruminant animals to improve feed efficiency.
Because of the complexity and high degree of specificity of ionophore resistance, it appears that ionophores don't contribute to the development of antibiotic resistance to important human drugs, says T.R. Callaway a member of the USDA Food and Feed Safety Research Unit, Southern Plains Agricultural Research Center, College Station, TX.
“Therefore, it appears that ionophores will continue to play a significant role in improving the efficiency of animal production in the future,” he says.
Callaway says these antimicrobials specifically target the ruminal bacterial population and alter the microbial ecology of the intestinal microbial consortium. This results in increased carbon and nitrogen retention by the animal, increasing production efficiency.
The feeding of ionophores to cattle decreases the feed needed for growth and increases feed efficiency, agrees Gary Weber, director of regulatory affairs for the National Cattlemen's Beef Association (NCBA).

NCBA maintains a strong stance that ionophores are not a concern for antibiotic resistance in cattle or humans. During the Cattle Industry Summer Conference in Dallas, TX, this year, NCBA members resolved to strongly urge the FDA and other appropriate agencies to reclassify polyether ionophores to reflect their true function as modifiers of rumen fermentation and coccidian prevention compound; and to discontinue classification of polyether ionophores as antibiotics. [More]

That excerpt is ancient, of course, but the problem is essentially the same.  It appears the classification will remain, as well.

The feed issue is part and parcel of the (my guess) strengthening animal welfare movement and the disturbing (to me) intensity of anthropomorphizing animals.

But on the political question, I have wondered when this refocus to food would occur, not if.  The reason: follow the USDA budget dollars. 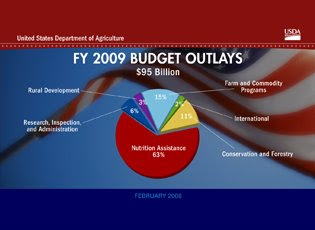 [Source][I don't have time to fix the enlarge problem, but the red slice is food, light blue is farm programs]

If the USDA budget is way more about food than farm programs, why shouldn't the Secretary focus more on food consumers than farmers?  Who are his real constituents?

It is more than ironic that while farmers love to point out they only receive a small portion of the USDA budget, they would fight like maniacs to prevent seeing food programs moved to say, HHS, as I think they should be.

If we are in for a Department of Food, it is partly because we lobbied for it.
Posted by John Phipps at 7:46 AM

John - As a pork producer I don't know if I can stand anymore gov't involvement in my life and operation. In the article there was a quote to that refered tp the fact that there would not be any problem with food safety. No argument, however I would like to state that eating a young healthy animal is better than an older less healthy animal.

Also you stated that there were gains we could do with out. Spoken like a true corn grower, I say this jokingly. It's gain and EFFICIENCY as well. We need to be efficient as possible, less days on feed, feed to gain, etc. Corn isn't cheap, thanks to the gov't.

NCBA can spin whatever fantasy it likes but the facts are that ionophores are antibiotics. But having said this, they should relax and actually read Rep Slaughter's bill as written. It does not include ionophores. NCBA (as do most ag groups)love to hype imaginary issues. Most recently, the EPA tax on cow and manure methane which got everyone's colon in a knot. But it was never really seriously considered for taxation. Sorry guys you let your imaginations run wild sometimes. We like to talk about activists hyping issues to gain attention and support. Well it should be no suprise that ag groups do the same thing. Its just that they are hypocrites and deny doing so. How they keep a straight face while doing so I will never understand. Character used to count for something in agriculture but not anymore.