Those durn lab-coat wearin' eggheads are nothing but trouble.  Another example. 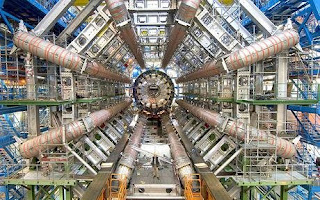 Critics of the Large Hadron Collider - a £4.4 billion machine due to be switched on in ten days time - have lodged a lawsuit at the European Court for Human Rights against the 20 countries, including the UK, that fund the project.

The device is designed to replicate conditions that existed just a fraction of a second after the Big Bang, and its creators hope it will unlock the secrets of how the universe began.

However, opponents fear the machine, which will smash pieces of atoms together at high speed and generate temperatures of more than a trillion degrees centigrade, may create a mini-black hole that could tear the earth apart.

Scientists involved in the project have dismissed the fears as "absurd" and insist that extensive safety assessments on the 17 mile long particle accelerator have demonstrated that it is safe. [More]

Science is boldly going where many don't want to go.  Luckily, it only takes a few to drag humanity forward.
Posted by John Phipps at 8:54 AM