Youse guys are all done, but we about 75% (500 acres of corn left). Between that and some complicating personal matters and the multiple deadlines for FJ, TP, and USFR I find myself short on enthusiasm/energy to post. Plus the GSS needs to be done (interior) in time for Thanksgiving - which is a home game.

I do miss the contact, and this week should see us way down the road.

Hope yours was a safe and surprisingly good harvest.

Thanks for reading.
Posted by John Phipps at 6:01 AM 1 comment: 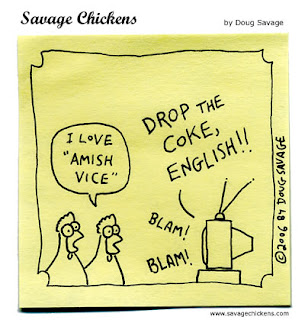 [BTW, I was right. Full-season hybrids are worse.]
Posted by John Phipps at 4:30 PM No comments:

Email ThisBlogThis!Share to TwitterShare to FacebookShare to Pinterest
Labels: fun, our farm


As always there are those who reveal their asininity (as they did throughout his career) with ascriptions like “salesman”, “showman” or the giveaway blunder “triumph of style over substance”.  The use of that last phrase, “style over substance” has always been, as Oscar Wilde observed, a marvellous and instant indicator of a fool. For those who perceive a separation between the two have either not lived, thought, read or experienced the world with any degree of insight, imagination or connective intelligence. It may have been Leclerc Buffon who first said “le style c’est l’homme – the style is the man” but it is an observation that anyone with sense had understood centuries before, Only dullards crippled into cretinism by a fear of being thought pretentious could be so dumb as to believe that there is a distinction between design and use, between form and function, between style and substance. If the unprecedented and phenomenal success of Steve Jobs at Apple proves anything it is that those commentators and tech-bloggers and “experts” who sneered at him for producing sleek, shiny, well-designed products or who denigrated the man because he was not an inventor or originator of technology himself missed the point in such a fantastically stupid way that any employer would surely question the purpose of having such people on their payroll, writing for their magazines or indeed making any decisions on which lives, destinies or fortunes depended. [More]

Even though I have grown to love Apple products, I have never really felt totally on-board like other fans. I did have a respect for Jobs simply because he was a class act in a world full of few.

Fry's point above about style and substance I found intriguing. Engineers are skeptical of style, even while we suffer for our convictions that substance will win out in the end.

It's kinda like all of us farmers who think fundamentals will eventually decide the market.

The case for volatility...

It's not fun to watch the market these days, but there is a growing awareness in the economics community that wild price swings may actually be necessary with very complex financial systems in order to make them fully transparent on risk.


The argument is akin to ideas about forest management—when governments suppress the natural fires that periodically clear away forest underbrush, they create a build-up of flammable material sufficient to power a massive conflagration. I certainly think an equivalent truth applies to financial markets. The longer it has been since a painful collapse, the greater the willingness to pile on leverage and complexity, such that the next crisis becomes unmanagably awful. I think it's important to be careful in applying this idea, however. A few caveats are in order.
...

Macroeconomic stabilisation is consistent with healthy volatility; real shocks can be perfectly good at trimming back over-aggressive financial actors. It's a mistake to think that a deep, demand-side recession is the only thing that will do where financial-market discipline is concerned.
And that brings us to the third point: suppression of macroeconomic volatility isn't as big a problem for financial markets as is moral hazard. I'm not sure that the relatively smooth macroeconomic performance of the last 30 years was as big a contributor to financial-market vulnerability as was the practice of stepping in to bail-out key creditors at various points over that period, while simultaneously facilitating a big increase in leverage. Governments that develop a habit of bailing out institutions when crisis strikes, and which don't go on to reform regulatory rules to ensure that next time the system is robust to individual failures, well, they're begging to suffer a build-up of financial-market excess. [More]


For agriculture the volatility we are seeing now has been greeted by some of us as an endurable exercise, since it allows our demand base at least the opportunity to lock in some less expensive feed/feedstocks and lowers the massive overhead pressure of outside funds being long.

What this also calls into question is the value of technical analysis. I like to think of lines on price charts as "elephant tracks" - the evidence of the fearful, vain elephant in our emotional "old" brain. Alarming price moves soon wear out comparisons with price history upon which technical analysis is supposedly based.


Investors may be feeling the same way, and are "not going to the ball park", as Yogi Berra would say, in droves.


Last week’s record volatility in U.S. stocks ended after four days. The anxiety it instilled among mutual-fund investors may linger for years.

Investors pulled a net $23.5 billion from U.S. equity funds in the week ended Aug. 10, the most since October 2008, when markets were reeling from the collapse a month earlier of Lehman Brothers Holdings Inc., the Investment Company Institute said yesterday. The period tracked by the Washington-based trade group included three of the unprecedented four consecutive days in which the Standard & Poor’s 500 Index rose or fell by at least 4 percent.
The roller-coaster ride was unnerving for fund investors who have already endured the bursting of the Internet bubble in 2000, a 57 percent collapse in the S&P 500 Index (SPX) from October 2007 to March 2009 and the one-day plunge in May 2010 that briefly erased $862 billion in value from U.S. shares. The debacles, combined with falling home prices, unemployment above 9 percent and a lack of trust in government to bring down spending, may sour individual investors on domestic stock funds for an additional three to five years, according to Andrew Goldberg, a market strategist at JPMorgan Funds in New York. [More]


In our own industry, think about the cash rent negotiations in progress that just took a different turn. I am in the middle of new leases, and rethinking some of my bids. There is suddenly more justification for lower offers, and those offers will look pretty good compared to prices today. My thinking is this atmosphere offers a good chance to secure a reasonable rent along with a promise/mechanism to share any future windfalls for those owners who find that important.


It may not work as planned, but this window of sharply lower prices may be the grain farmer's equivalent of today's feed buyer opportunity to control lower priced inputs.

Email ThisBlogThis!Share to TwitterShare to FacebookShare to Pinterest
Labels: markets

We've only done about 80 acres, but the early (105 day) corn was better than expected (185-200). The later planted, fuller season drops off, judging by some end rows and half-ears.

Guys around me are getting very good beans, however, 60-65. Our early beans were less, but still better than we imagined. For the first time in four years we at least had some plants on the heavy black parts instead of holes, so those areas handled the dryness better.

Meanwhile, the cold temps last night have me scrambling to get the heaters in the greenhouse and GSS going.