For some - it just costs.  College is no longer the guarantee of a good or even adequate job. Especially considering the enormous increase in the cost.


Yes, the college grad will spend years paying off her loans. But eventually her earnings net of loan payments will pull ahead of the high school graduate's. So, case closed. It may hurt to write the checks, or borrow, but college pays.
Well, maybe not.
According to the College Board, it takes 14 long years before the four-year college grad's income, net of loan payments, starts to beat what the high school grad earns. During all those 14 years, college doesn't pay. High school pays. [More]

Recently there has been a vigorous debate about the how much choosing the wrong degree is contributing to this problem. Ryan Avent has the best answer to this criticism, I think.


Personally, I think this kind of blog post—Mr Cowen's—goes a long way toward explaining the current job market malaise for the young. It is remarkable to me how readily old, successful professionals dismiss the labour-market difficulties of young adults as the product of their poorly-chosen majors and general lack of ambition, and on what flimsy evidence they're prepared to base these views. There are now 3.3m unemployed workers between the ages of 25 and 34. That's more than twice the level in 2007. There are over 2m unemployed college graduates of all ages; nearly three times the level of 2007. There are many millions more that are underemployed—unwillingly working less than full-time or unwillingly working in a job outside their field which pays less than jobs in their field. As far as I know, the distribution of college majors didn't swing dramatically from quantitative fields to art history over the past half decade.
Meanwhile, the Wall Street Journal provides us with a handy interactive graphic examining unemployment rates by major according to the 2010 Census. Coming in toward the top of the list and ahead of "art history and criticism" are the sorts of degrees you'd expect, like those falling into "miscellaneous fine arts", but also "computer administration management and security", "engineering and industrial management", "international business", "electrical and mechanic repairs and technologies", "materials engineering and materials science", "genetics", "neuroscience", "biochemical sciences", and "computer engineering". I bet those graduates are all trying to break into puppetry!
I am sure that many young graduates feel entitled to better work than they've managed to find, and some of them probably chose poorly when it came time to matriculate. But I see little evidence that high unemployment is due to the shiftlessness of youths and far more evidence that high youth unemployment is due to systematic weakness in labour markets associated with a shortfall in aggregate demand. [More worth reading]

While I agree there seems to be no evidence students are flocking to dubious majors more so than before, it seems obvious the demands of a thin job market accentuates discriminates against them more. Now add in the the decline in public employment (teachers, administrators, government workers, etc.) which was often the employer of last resort for such degrees and you have the "Dustin" phenomenon. 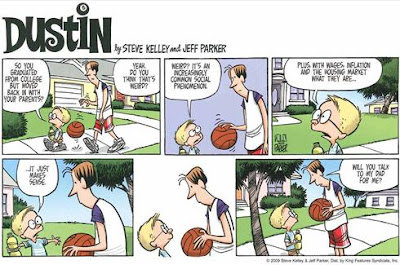 Trying to laugh at this problem is probably healthy, but there is growing concern among economists - not to mention parents - that the economy is trending away from a solution to this problem.

And the idea of forcing everyone to become engineers or doctors isn't working either. For one thing, there is a huge attrition rate is those fields.

Politicians and educators have been wringing their hands for years over test scores showing American students falling behind their counterparts in Slovenia and Singapore. How will the United States stack up against global rivals in innovation? The president and industry groups have called on colleges to graduate 10,000 more engineers a year and 100,000 new teachers with majors in STEM — science, technology, engineering and math. All the Sputnik-like urgency has put classrooms from kindergarten through 12th grade — the pipeline, as they call it — under a microscope. And there are encouraging signs, with surveys showing the number of college freshmen interested in majoring in a STEM field on the rise.

But, it turns out, middle and high school students are having most of the fun, building their erector sets and dropping eggs into water to test the first law of motion. The excitement quickly fades as students brush up against the reality of what David E. Goldberg, an emeritus engineering professor, calls “the math-science death march.” Freshmen in college wade through a blizzard of calculus, physics and chemistry in lecture halls with hundreds of other students. And then many wash out.
Studies have found that roughly 40 percent of students planning engineering and science majors end up switching to other subjects or failing to get any degree. That increases to as much as 60 percent when pre-medical students, who typically have the strongest SAT scores and high school science preparation, are included, according to new data from the University of California at Los Angeles. That is twice the combined attrition rate of all other majors.
For educators, the big question is how to keep the momentum being built in the lower grades from dissipating once the students get to college. [More]

I also wonder that an oversupply of engineers, etc. might not soon remove these last "safe" degrees, reducing job searches to more a matter of luck and connections than merit.

What I do know is this. I don't recall clearly my sons' graduation ceremonies, but I have a clear recollection of the days they accepted job offers.

At any rate, employing all who want to work is our largest economic problem, IMHO. If others disagree, it may be because their kids are too young or non-existent.

This post really reminds me how lucky I am as a recent May graduate to have an extremely good job in my field that I love doing. However, I believe that credit is due in no small part to my choice to major in Agriculture. All else equal, my classmates have been much more likely to find jobs if they majored in some aspect of the ag industry, even if that job is in the business or engineering fields. I would be interested to know your opinion on that correlation, but that is certainly not the answer to the debate about why there is such a high unemployment rate amoung recent grads.
Instead of the blame for not being able to find a job being focused on the choice of an ambiguous major or a lack of ambition after school, I would propose that the blame be laid on a lack of ambition DURING school. While a poor GPA is not a major detractor, I would suggest that employers are much more likely to hire someone who was involved in their campus or the community than a student that partied their way through school and only did the bare minimum. From my experience, even students who started college with every advantage but focused too much on the social aspect of college are much less likely to find a job than those who started with only enough to get them in the door but worked hard and got involved.

Possibly, Andy, but I know a number of young people who aren't involved in campus community because they devote plenty of time to their studies and the little 'free' time they have to a part time job so they can keep the student loans a small as possible. You blaming partying in school is just a refinement of the others who blame these young people's woes on their choice of major. You got lucky, young man. Thank your lucky stars and stop denigrating others not as fortunate as you.