Not being a gun enthusiast, this item blew me away.


Earlier this month, a British Army sniper Corporal Craig Harrison broke the world’s record for superaccurate shooting, taking out a pair of Taliban machine gunners from a mile-and-a-half away. It was a one-in-a-million feat — one performed under “perfect” conditions, Harrison says: “no wind, mild weather, clear visibility.” [More] 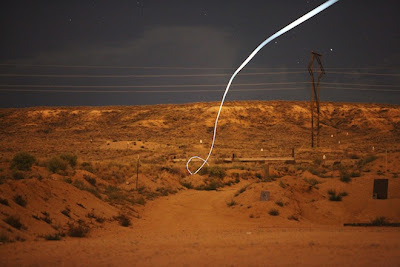 The U.S. military has been after self-guided bullets for years. Now, government researchers have finally made it happen: a bullet that can navigate itself a full mile before successfully nailing its target.
The breakthrough comes courtesy of engineers at the government’s Sandia National Laboratories. They’ve successfully tested a prototype of the bullet at distances up to 2,000 meters — more than a mile. The photo above is an actual image taken during one of those tests. A light-emitting diode was attached to the bullet, showing the amazing pathway that the munition made through the night sky. [More]

Between stuff like this and drones, is there a good argument against being paranoid?
Posted by John Phipps at 10:01 AM

The new Barrett 416 is quickly replacing the 50 cal as the snipers choice. Using a new bullet design and advanced powder it developes extreme velocity, is smaller and very consistant on cold shots at 2500 yards.

SELF-GUIDED BULLETS! Unbelievable, so this is what the best and the brightest in western science are working on....

i'd be afraid of making a comment on this as some machine is watching all of this for someone.