Since discovering there are...

More Muslims than Methodists in IL, I guess I have been sensitized to mentions of what's happening in the Islamic world. Frankly, it's not a whole lot clearer than the confusing internecine Christian squabbles.


IT SEEMED historic. Muslim scholars, 170 in number and representing nine schools of legal thought (including four main Sunni ones and two Shia), gathered in Amman and declared that, whatever their differences, they accepted the others’ authority over their respective flocks. Implicitly, at least, they were renouncing the idea that their counterparts were heretics. Some called that meeting in Jordan in 2005 the biggest convergence since 969, when a Shia dynasty took over Egypt.
Many of the globe-trotting greybeards who met there, and at a similar gathering in Qatar in 2007, remain actively and optimistically engaged. But seen from the outside, feuds between Sunnis, who make up roughly 80% of the world’s Muslims, and the Shia minority (most of the rest), remain savage and are, in some ways, worsening. [More, along with the helpful chart below]

For most of us, the Islamic culture is just too much work to understand and too alien to be attractive, so we marshal our ignorance when the issues arise between cultures. I know I find little attractive about the theology and practices, but at the same time my lack of person-to-person contact with Muslims makes me uneasily aware of my ignorance, and hence, poor judgements.

Partly it's because of the factionalism and clear terrorist ties to some of the sects. But then you look at the largest Muslim country (any guesses?*) and think "they're not so weird". 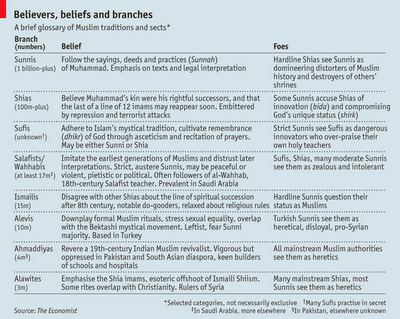 Well, we may be getting some help bridging this gap. One of the biggest cultural differences with the West has been Islamic problems with capitalism. Due to Sharia usury laws, Islamic entrepreneurs have had to devise some, umm, innovative workarounds to help capital flow.


The chief loophole was murabaha. Let’s say that you, a small businessman, wish to go into business selling cars. A conventional bank would examine your credit history and, if all was acceptable, grant you a cash loan. You would incur an obligation to return the funds on a specific maturity date, paying interest each month along the way. When you signed the note and made the promise, you would use the proceeds to buy the cars—and meet your other expenses—yourself. But in a murabaha transaction, instead of just cutting you the check, the bank itself would buy the cars. You promise to buy them from the bank at a higher price on a future date—like a futures contract in the commodities market. The markup is justified by the fact that, for a period, the bank owns the property, thus assuming liability. At no point in the transaction is money treated as a commodity, as it is in a normal loan.
But here’s the catch: most Muslim scholars agree that there is no minimum time interval for the bank to own the property before selling it to you at the markup. According to Timur Kuran, the typical interval is “under a millisecond.” The bank transfers ownership of the asset to its client right away. The client still pays a fixed markup at a later date, a payment that is usually secured by some sort of collateral or by other forms of contractual coercion. Thus, in practice, murabaha is a normal loan.
Since murabaha must be asset-based, however, it can’t help a small businessman who needs a working-capital loan, for example, to provide cash on hand to meet payroll or other expenses. To get such capital from an Islamic financial institution, an entrepreneur would have to sell the bank an equity interest in his business. This is far riskier for the bank and thus much harder to obtain. [More interesting background]

Let's face it, it's no worse than say grain loans/PIK/LDP contortions at the FDA, IMHO. Anyhoo, these types of financial sidesteps are gaining ground, especially in countries just beginning to taste some economic wiggle room. After all, it doesn't take long to adopt a "It's about the economy, stupid" mentality when you are suddenly having to actually pander for votes, instead of arranging the elections.


Islamist parties are increasingly becoming "service" parties: an acknowledgment that political legitimacy and the likelihood of re-election rests on the ability to deliver jobs, economic growth, and to demonstrate transparency. This factor introduces a huge degree of pragmatism in their policies. The example of Turkey, especially its economic success, has had a major impact on Arab Islamists, many of whom would like to emulate the Turkish model. The Arab Islamists have, in other words, understood the truth of the slogan, "It is the economy, stupid!" The Turkish model, with the religiously observant provincial bourgeoisie as its kingpin, also acts as a reminder that Islam and capitalism are mutually reinforcing and compatible.
It is notable that the Islamists' economic agenda does not espouse a distinctive "Islamic" economic model. This is unsurprising, however, as an Islamic economic model does not exist. Islamists suffer from a paucity of original ideas on the economy and have not even developed a blueprint to tackle the structural socioeconomic crisis in Arab societies.
Nevertheless, what distinguishes centrist religious-based groups from their leftist and nationalist counterparts is a friendly sensibility toward business activities including wealth accumulation and free-market economics. Islamism is a bourgeois movement consisting mostly of middle-class professionals, businessmen, shopkeepers, petty merchants and traders.
If there is a slogan that best describes Islamists’ economic attitude, it would be: "Islam-is-good-for-business". Many Arab Islamists admire and wish to imitate the example of Turkey, even though they know little about the complexity of the country’s economy and lack Turkey’s strategic economic model. What impresses them is Turkey’s economic dynamism, especially the dynamism of the religiously observant provincial bourgeoisie who have turned Anatolian towns such as Kayseri, Konya and Gaziantep into industrial powerhouses driving the growth of the Turkish economy. [More]

In fact, keeping our eye on Turkey (which is becoming a more reliable US partner, as those things go) or Indonesia instead of Saudi Arabia and Iran might help us coexist a little more anxiously with the enormous Muslim world.

Nothing fosters bonding like griping about government economic policies together.

Great minds. As I was reading and got to the "millisecond", I said to myself: that's PIK. Read a bit further and saw you'd already had that thought.