The rise of North America...

To the consternation of many who are still struggling with the election result, the American recovery is still crawling along. Sign of doom are actually fading, the fiscal cliff not withstanding. And compared to the rest of the West, it is definitely more hopeful. 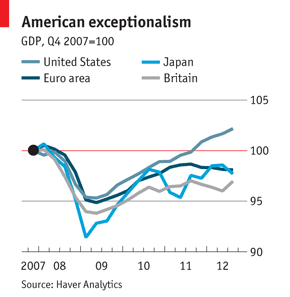 I will admit it is a remarkably boring, and still too slow, rate of growth, but maybe it is the best we can expect with US government austerity already underway for the past three years, which is a definite anti-stimulus.

But the real surprise for NA is right under our noses, cartographically speaking. Mexico is getting its economic act together.


Let's apply the "extent of the market" analysis to Mexico's improving fortunes. The focus of trade policy is certainly relevant:


By throwing open its market under the North American Free-Trade Agreement (NAFTA) with the United States and Canada and a host of other bilateral trade accords, Mexico has become a base from which carmakers export to both halves of the Americas, and worldwide. Volkswagen, for example, makes all its Beetles and Jettas there. Although Nissan produces some vehicles at a Renault plant in Brazil, most of those it sells in Latin America come from two plants in Mexico. In all, 2.1m of the 2.6m vehicles produced in Mexico last year were exported.
By contrast, in Brazil the main aim of public policy has been to push carmakers to build local factories from which to supply the country's huge domestic market. Only 540,000 of the 3.4m vehicles manufactured in the country last year were exported. Around three-quarters of Brazil's car exports go to Argentina. Mercosur, to which both countries belong, has long aspired roughly to balance trade in cars and car parts between the two.

I wonder over the long run whether other factors aren't also working in Mexico's favour. America's weight in Mexico's market potential may be rising thanks to rapid population and economic growth in America's Sunbelt. Cultural and social ties are almost certainly rising across the two economies thanks to large-scale immigration from Mexico. The prospects for substantial convergence in incomes north and south of the border look better than they have in some time: a fascinating and heartening development. [More]

So let's sum up. We have Canada to the north quietly, albeit slowly, steaming along, a slow but resilient recovery in the middle (US), and strong growth south of the border. Add in encouraging signs in the housing market, and the predictions of the hard right could be upended: things very well might get better.