Perhaps it was wishful thinking, but my previous conviction concerning global population growth just isn't panning out. I was convinced continued economic growth would trigger lower fertility rates pretty much everywhere, but it's looks like Africa remains the exception.


This just in: Humanity is growing faster than we thought.
In advance of World Population Day, United Nations demographers have once again revised official projections -- upward. This meticulous band of number crunchers doesn’t mean to be alarmist, but its statistics can be startling:
--Nigeria, the West African nation slightly larger than Texas, is on track to surpass the United States as the world’s third-most populous country by 2050. The size of its population may rival that of China by the end of the century, unless something dramatic happens.
--The number of people living on the African continent is set to nearly quadruple by the end of the century, rather than merely tripling, as previously projected.
--The world’s population is on track to reach 9.6 billion by midcentury and nearly 11 billion by 2100, which is 700 million more than was projected two years ago.
The reason for the higher figures? A slew of recent household surveys in African countries revealed the average number of children per woman was higher than previously estimated, said Francois Pelletier, chief of the U.N.’s population estimates and projections section.
In some countries, “a high level of fertility appears to have risen even higher,” Pelletier said. In others, “we realized the earlier estimates were too low.”
A seemingly modest change from an average of four children per woman to five, he said, can produce a dramatic upswing in coming decades due to the power of compound growth.
The prospect of Africa’s population of 1.1 billion exceeding 4 billion has surprised some demographers, because Africa is not following the pattern of falling fertility around the world.  Women on average around the globe have half as many children as they did in the 1960s. [More]

To put it graphically: 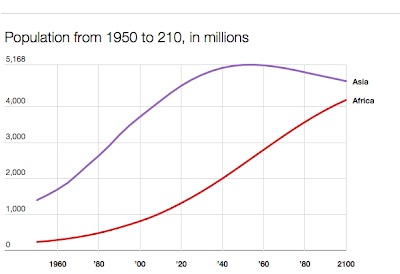 [Source, with the mislabeling]

After yet another "demographic surprise", I doubt this is the last word, but still the evidence points to a much higher number for the end of the century that we now expect.

Email ThisBlogThis!Share to TwitterShare to FacebookShare to Pinterest
Labels: population