I am disturbed by growing wealth and income inequality, but don't have any really firm conviction what the implications are or what might be dome to mitigate it. Nor do experts seem to have firm answers to choose from either. For example, the common logic that growing inequality leads to revolutions from the have-nots isn't well supported by historical evidence.

In 1904, on the eve of military defeat and the 1905 Revolution, Russian income inequality was middling by the standards of that era, and less severe than inequality has become today in such countries as China, the United States, and Russia itself.  We also note how the interplay of some distinctive fiscal and relative-price features of Imperial Russia might have shaped the now-revealed level of inequality. [More]

And I really have a hard time imagining Americans in mobs with pitchforks, etc. singing some revolutionary anthem, even as we soar to new heights of inequality. Indeed, debate rages about the nature and urgency of the problem.

I see two big and very real problems: slow income growth for many income classes and a problem with excessively high returns to finance at the very top.  (As an aside, both of these problems contain elements of both “left-wing concerns” and “right-wing concerns,” and both problems are deeper than any particular ideology can solve and they should make virtually everyone rethink their views).Those are the problems and we should try to fix them.If we could fix these problems, that would mean a smaller financial sector, less moral hazard, better allocation of capital, and for most/all income classes rates of income growth comparable to the 1948-1972 period, chop it up as you wish.  Imagine that everyone’s income went up three percent a year, every year, and every generation was about twice as rich as the parents.  Whether there then would be more or less marginal “churn” in the relative income rankings is not a matter of irrelevance but having somewhat more churn should not be viewed as a major social goal per se.  It would depend on the reason for the immobility, and the real focus of our concern would be the reason (e.g., bad schools? some kind of unfairness?), and not the marginal change in the numerical churn per se.Given that background, and those two very real problems, you can in fact create other “problems” by creating and manipulating more complicated statistics, based on the initial problems, and that can lead you to various measures of inequality and immobility.  But not all inequalities are bad, or avoidable, and the same is true for immobilities.  The valid problems, as embedded in the new complicated measures, still will boil down to the two simpler problems mentioned above.  In the meantime, toying around with misleading and less transparent aggregate measures of inequality and immobility will bring confusion as to what is really at stake.Focus on the two very real and fairly simple (as distinct from simple to fix) problems. [More]

Well, here's a new theory about how inequality arises and plays out. It even has a somewhat cryptic, almost hieroglyphic, illustration. 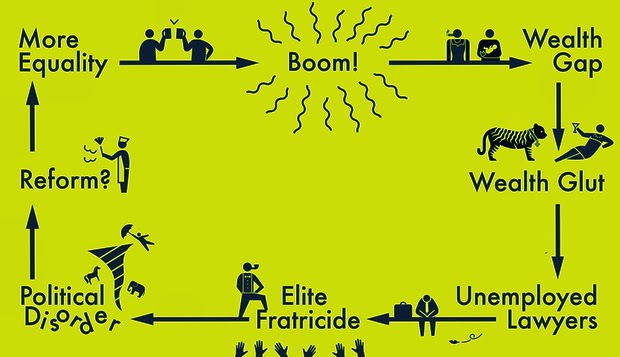 How does growing economic inequality lead to political instability? Partly this correlation reflects a direct, causal connection. High inequality is corrosive of social cooperation and willingness to compromise, and waning cooperation means more discord and political infighting. Perhaps more important, economic inequality is also a symptom of deeper social changes, which have gone largely unnoticed.Increasing inequality leads not only to the growth of top fortunes; it also results in greater numbers of wealth-holders. The “1 percent” becomes “2 percent.” Or even more. There are many more millionaires, multimillionaires and billionaires today compared with 30 years ago, as a proportion of the population.Let’s take households worth $10 million or more (in 1995 dollars). According to the research by economist Edward Wolff, from 1983 to 2010 the number of American households worth at least $10 million grew to 350,000 from 66,000.Rich Americans tend to be more politically active than the rest of the population. They supportcandidates who share their views and values; they sometimes run for office themselves. Yet the supply of political offices has stayed flat (there are still 100 senators and 435 representatives -- the same numbers as in 1970). In technical terms, such a situation is known as “elite overproduction.”...Elite overproduction generally leads to more intra-elite competition that gradually undermines the spirit of cooperation, which is followed by ideological polarization and fragmentation of the political class. This happens because the more contenders there are, the more of them end up on the losing side. A large class of disgruntled elite-wannabes, often well-educated and highly capable, has been denied access to elite positions. [More]

While I'm not sure how much I buy completely into this explanation, it is a novel possibility, and one that seems to have some anecdotal evidence behind it (read the whole article).

But if true, it does have some pretty serious implications for agriculture, as the Battle of the Elites isn't too far from what we see around us right now. It also has considerable knock-on effects as it unfolds.

Tyler Cowen's book, Average Is Over, looks at several aspects of inequality and has provoked considerable debate. In addressing some questions about what the future could look like, I found this nugget.

6. In talks (but not in the book) I have suggested that food production is the best candidate for “what will be most difficult to augment” in an age of smart software.  Food production seems harder to “wall off” and it seems more embedded in local culture (for better or worse, usually for worse) than factory production.  See our MRU video on conditional convergence, which considers the work of Dani Rodrik in this regard.  It would mean that the price run-up for Midwestern farm land in the United States may not be a bubble. [More]

I realize I am biased toward strong land prices, so this could simply be me picking out voices that agree with me. But what if land prices are not simply a function of interest rates and corn prices, but increasingly affected by mechanisms mentioned above, as well as the liquid asset glut, confidence in alternative assets, etc. that are hard to measure and barely covered in ag econ classes?

What if we saw an income squeeze in agriculture and merely slower appreciation in farmland prices? We could simply shift the mix of buyers to favor outside investors, I think.