More to fret about...

Agriculture seems to me to be overly concerned about what other people think of them. While much of this has to do with defending our special status with the government is many instances, this anxiety is also present in less-subsidized sectors.

Some of it may be attributable to our odd concern over being "over-regulated".  I use quotes because what many see as intrusive regulation looks to me like being required to clean up our messes so they don't burden others. Or better yet, regulations offer strong  protection from our litigious fellow citizens. Regardless, apparently if we are well thought of, this will ameliorate the problems, the thinking goes.

I'm not sure why we are so concerned. But since we are here is some sobering news:

We are not a prestigious occupation. 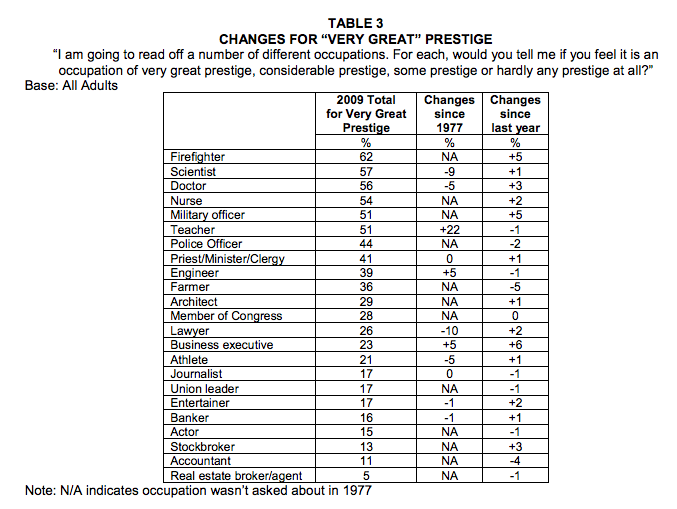 It's even worse when you look at our NORC score.

Maybe I'm just getting old and grumpy, but I don't think I was ever worried about whether people were "dissing" my occupation. In fact, I can enumerate some positive aspects of being ranked lower.


It's not that I don't want people to think well of my work. But I don't expect them to respect me because of my occupation. That could be what we're seeing here in agriculture: a respect entitlement attitude.

Good post, but my question is if the public knew more about our occupation, what would they really think?

I love your thought on the respect entitlement attitude. I think unfortunately that is the approach of too many in agriculture and the agriculture media today. I hate the fact that we essentially say to the consumer "WE KNOW WHAT'S BEST FOR YOU SO YOU NEED TO LIKE IT." Oh and by the way, I'm a farmer so that also means I work harder than you. Not exactly a glowing media campaign if you ask me.

Why don't we just start by telling the truth? Agriculture is different today than 50 years ago. Most grain farmers probably don't work harder than a person in the suburbs. (Yes they do maybe seasonally, but I have lots of friends in the city who work hundreds more hours in a year and get paid less to do it.) It's a job now that requires skill, professionalism, good hr and management skills, and science.

Agriculture advocates want us to still keep our image of the hardworking honest farmer in the field working with a hoe and wearing his bibs, but when the consumer insists on buying the product that he used to produce, we won't sell it to him?

I have been thinking for quite some time as farms consolidate and numbers get minimal will society still see us as "the salt of the earth" and want to send money to guys farming with net worths of $10,20,50 million? In Ontario when I got into the pork business years ago we had 20,000 active producers,now we have around 1,550 and produce more hogs. We could go down to $100-200 medium size farms and keep same supply numbers . The best revenue generator for grains and oil seed farmers this spring has been crop ins. re-plant were you get around $80 acre to re-plant and seed companies give free re-plant seed so you get paid pretty good to drag a no til planter or drill around . Lots of re-planting done that would have been left if there was no ins. payment.Farmers rate higher in popularity with society than they do with there neighbors. regards-kevin

"...a respect entitlement attitude," an excellent and lovely turn of phrase, made so by its aptness.