Pretty soggy and I've got my video sent for this week, so I need to post. At least, I'm out of excuses. And this is a topic I been grappling with for many months with little success unraveling.

Basically put, does the free enterprise system which so many of us have defended for so long somehow broken down or been superseded? It's hard to look at the flood of numbers that indicate troubling trends and not ask the question anyway.

For example, the story on median income is simply appalling. 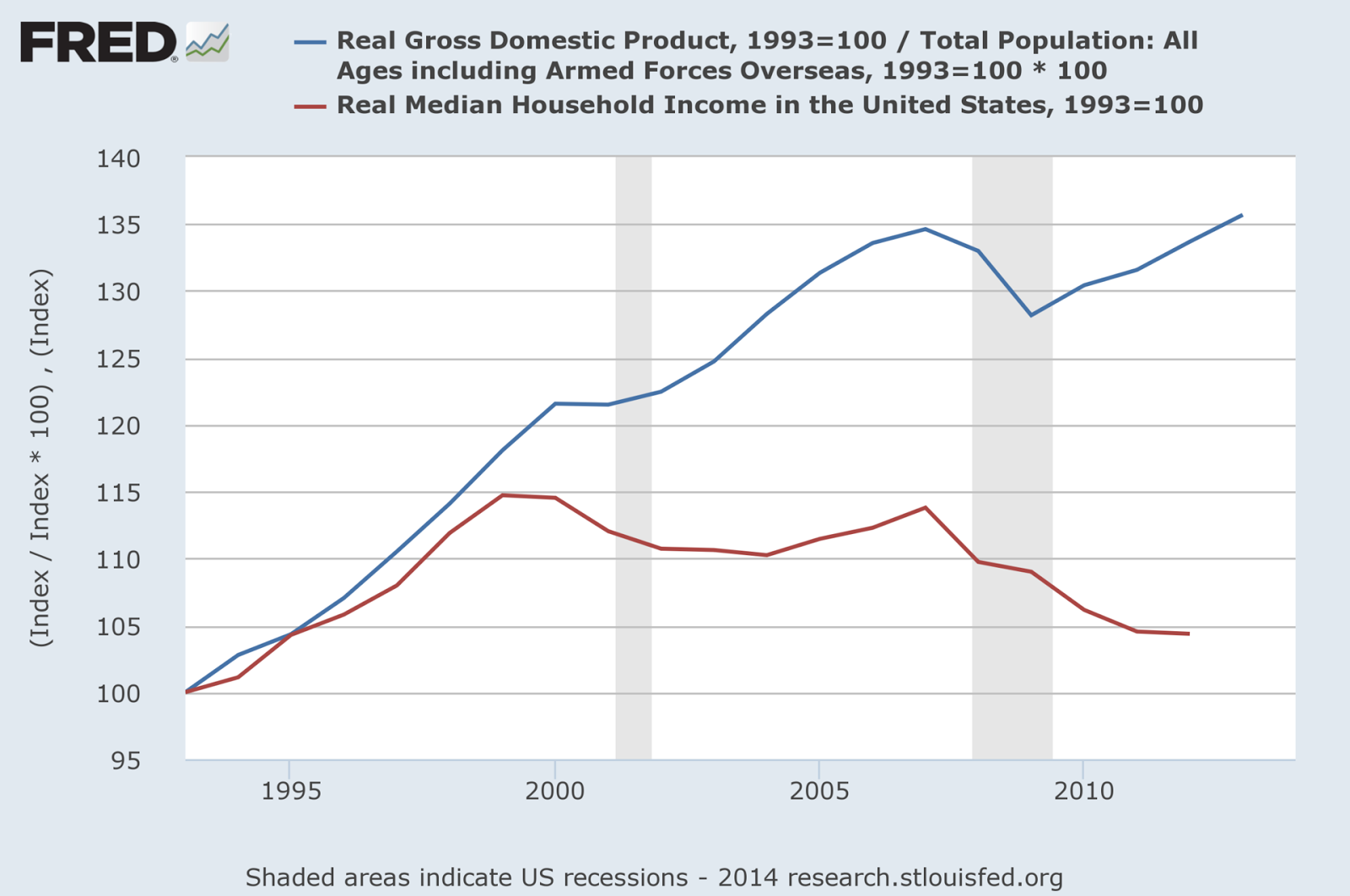 Some important caveats: As I (and others) have said before, presidents probably get much too much credit when the economy is doing well and much too much blame when the economy is doing poorly.Mr. Obama in particular inherited an economy that was really just starting the death spiral set off by the financial crisis, as you can see in the chart above. And as Carmen Reinhart and Kenneth Rogoff have shown, economies struck by major financial crises generally take 10 years to fully recover.We’re currently in Year 5 after the crisis first hit.  Since median household income hit bottom in the first quarter of 2010, it has risen about $769.36, not nearly enough to cover the ground lost on the way down. [More]

But the story is not grim at all for some of us. 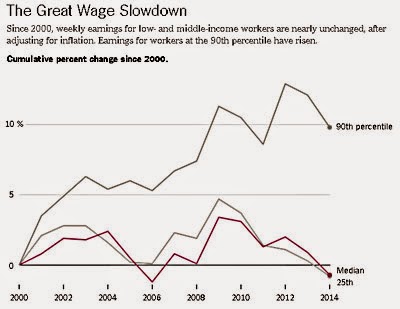 And this is the crux of the matter. THE big debate in economics is whether wildly unequal outcomes are now baked into the capitalistic cake, so to speak. Have we reached a point where the leveling mechanisms (economic mobility) are not up to the task of preventing an ever more concentrated wealth distribution?

But here’s where I become less optimistic than the president. Imagine that same prognosticator had added one more bit of clairvoyance: Despite all those positive trends, the real median weekly pay of full-time workers in mid-2014 would be slightly lower than it was in mid-2011. Or than it was in mid-2008, the year before Mr. Obama took office. Or in mid-2000.It’s certainly possible that we’re on the verge of a pay surge, much as we were in the mid-1990s, when the situation also seemed bleak. It’s also possible that the forces behind the great wage slowdown – from globalization to our often-sclerotic government to (at least for many workers) technological change – are still more powerful than the positive forces. In that case, the wage slowdown won’t end until the country makes much more progress in improving education, cutting medical waste and energy costs and creating a more responsive, nimble government.Either way, the great wage slowdown, or the end of it, will help set the tone for American life in the coming decade. It has already done so in the century’s first 15 years, causing widespread unhappiness with the country’s direction and leading voters to shift partisan directions multiple times. The political turmoil isn’t likely to end until the economic reality changes. [More]

One of our most central beliefs in the US has been the idea of any person could make it big. While that's still true, it is now so rare that we use the same handful of examples to defend it (Zuckerberg, et al.) instead of pointing to people in our neighborhood of circle of friends.

We have been enamored with the example of "the self-made man". I just don't see that option as any more relevant that lottery winners as paradigms of conduct. Mostly because, along with others, I now see circumstance as having become more defining than character.The dynamite and ginger Jack brought to the roofing trade was necessary to exploit this advantage. But listening to him describe the factors that produced Eastern’s early success, I realized I’d fallen prey to the same fallacy that had led Milton Gordon to attribute the achievements of Jewish garment workers solely to their industry and ambition, and not the conditions in which their ethic thrived. The self-made mythology has evolved in its 200 years: from an exuberant celebration of opportunity in the young republic to a stern admonition against excess in the antebellum years; from a naive story of pluck rewarded in the post-Civil War-era, to a brazen defense of money-getting in the Gilded Age; from a beacon to the great wave’s huddled masses, to a pep talk for the young women of the digital age. The one constant, however, has been the idea that character trumps circumstance. I’d caught myself buying into it.Jack knew better. Though an unapologetic believer in the power of hard work to lift men above their means, he allowed that even the hardest worker can’t impose his will on the world—he acknowledged that other men, and other forces, played a role in his rise. Over the years, I now saw, I had revised my father’s story in the retelling to emphasize his accomplishment, and his agency, just as William Temple Franklin had done with his grandfather Benjamin’s story. I’d counted myself a skeptic. It turned out I’d been a believer, and a mythmaker, all along. [More of a superb essay]

My father was a devoted reader of Horatio Alger in his youth. The wretched prose and simplistic plots shaped his view of how the world worked.  I just couldn't see it. After all this time, I think I have found our divergence point: the value of simple labor.

I think we have reached a level of technology that is relentlessly devaluing hard physical labor. Even in agriculture, the idea that hours in the field will translate to success is quietly recognized as incomplete, if not flawed. You need to pick your parents carefully, and memorize the plat book before dating.

Moreover, the example of a hired man going on to become a successful independent farmer pretty much ended with my generation, IMHO. As much as I have suspected our profession evolving into a hereditary agristocracy, I am now convinced.  And to my embarrassment, I am fueling the change by building a castle with ramparts and moat for our family.

Free enterprise in agriculture? Ha! Thanks to farm programs and crop insurance, profits are privatized and losses are socialized. That's a pretty big barrier for entry.

I wonder whether the "hired hand" to farm owner ladder ever really worked. In my family 3 farms were purchased, but none by a "hired hand". My great grandfather came closest, but he used money from his ministry to buy land in Perry County; my father had to leave chemical engineering because of lead poisoning, so his father bought a NY farm for him, again using minister's salary (ministers used to be higher in the pay scale than today). And my maternal grandfather used money from building houses in NYC to buy a NY farm. Seems to me people typically needed a helping hand/outside income to make that initial purchase of land and equipment; once started some were able to advance and expand.

And, if you read Horatio Alger closely, that's what he thought: because a boy was moral and hardworking, he was usually found by a patron who made all of the difference.

I saw the hired man scenario unfold in my community, but in all but one case it was a single large landowner who made the difference. So I agree. The odds of finding that size of patron today is much lower, IMHO.

Not only that, but such an outcome would tend to have an enormous tenure risk. The patron dies and ...?

I found a set of HA books and gave them to Dad late in his life for Christmas. I read one (almost) and you are right again. The boy was found deserving by a deus ex economica.

As a political economy, America has always had a significant number of 'labor devaluers'.

What I think has enormously change - especially since we graduated from Rose - is how people value social performance and enterprise.

The financially 'hot' are now many times the most ephemeral - not just in economic model (like Internet ad revenue models) - but in our moral preferences (celebrities, athletic starts, etc.).

Local communities and organizations sometimes act more intelligently - so there are folks who achieve through hard work - but the larger political system has become moronic.

Much of this seems the result of poor educational systems at all levels -from poorly funded school systems to elaborate universities who place more emphasis on professionalized achievement than truth-seeking.