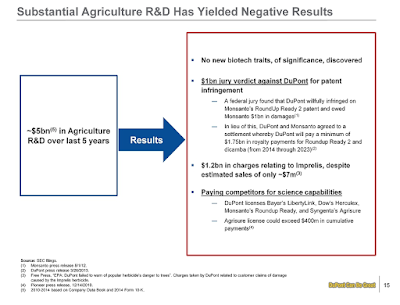 John, I wonder if DuPont hasn't realized they have had seismic shifts to their business this decade? The stock market looks lesser attractive and it would be one thing if the build and rebuild strategy existed now, and, if Omaha didn't have Warren Buffett, their economy would go off.

The strong USD and weak CAD bailed out input-used machinery dealers in Canada as our pricing before the big exchange rate "change" gave us a good 15% less seed costs than in US and dealers of used equip't could move it to US at a 15% discount and come out OK . On our farm we are doing some serious testing of GMO soys @ $1 # seed cost too our unpatented bin run NGMO seed @.20 # and if they make SQWH quality there is a $2 bu. premium . Thoughts now are too buy GMO corn seed @ 220 ish bag and clean up any weed issues and then plant NGMO soys as our area doeesn't do corn on corn. Dupont cut seed production 40% here and I understand 0 acres in our county.regards-kevin

We all know something has to give. Maybe a bunch of non gmo corn and beans next year. Roundup doesnt work anymore, anyway. Corn borer should be on the endangered species list, and we can take our chances with rootworm with crop insurance. Rents have to go down too.

Just because Dupont and Monsanto can't lower the price because of the shareholders, doesn't mean we have to buy it.