But what about concealed carry?...

By now we all know the crime rate in the US would be near zero if every man, woman and child carried one (or possibly several) guns.   Permit me to suggest an alternative: a tiny bugle. 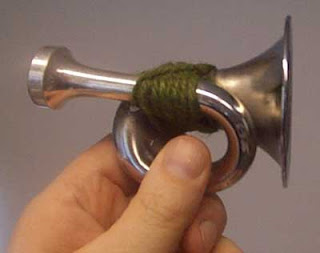 A pensioner scared off two burglars who broke into his home with a loud blast on his bugle. Alex Wade, 78, hid behind a door and gave the two men a "short sharp burst" when they crept past. The bachelor, who lives alone, keeps the homemade instrument on his pillow for "emergencies". He said the burglars, who broke in through a downstairs window at 2.40am on Wednesday, ran off empty-handed.

Mr West, from Coventry, West Midlands, even tried to chase them in his pyjamas, but the thieves managed to get away. His courageous actions have been praised by West Midlands Police and led to the arrest of two men. [More]

So if you are still a little leery of firearms, this could be your security blanket.
Posted by John Phipps at 4:52 PM