What's the deal with Phoenix?...

Long a winter haven for Midwest farmers, Phoenix has the dubious honor of leading the downward spiral in house prices. 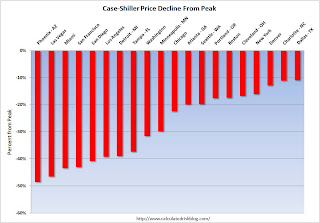 [Click to enlarge]
[More]
Las Vegas, I can understand.  Heck, Henderson County was the fastest growing county for years back in the recent day.  But Phoenix?

Phoenix, Las Vegas and San Francisco continued to lead year-over-year decliners, with drops over 30%. Minneapolis continued to have large month-to-month drops, while the rate of decline accelerated in Chicago and Tampa.
Dallas, Denver, Cleveland, Boston, Charlotte and New York managed to avoid double-digit year-over-year declines. However, all of the 20 metro areas are in double digit declines from their peaks, with nine posting declines of greater than 30% and five of those (Las Vegas, Miami, Phoenix, San Francisco and San Diego) in excess of 40%.
“The large inventory overhang will continue to weigh on prices for some months yet. They could fall another 10%,” said Paul Dales, U.S. economist at Capital Economics. “Nevertheless, the more recent rise in mortgage applications and the rebound in home sales has made us hopeful that the rate of decline in house prices will soon moderate.” [More]

Think about it.  If you did everything right - came up with a 20% down payment, for example - and bought in 2007, say, you're still deeply underwater.  In the desert.

The only thing I can find to explain the Phoenix effect would be a massive oversupply of houses.  At some point, the price drop begins to feed on itself, I suppose, so potential buyers are holding back and saving money every day doing so.

Could be some hellacious bargains down there if you are into arid living and golf.
Posted by John Phipps at 8:05 AM

Email ThisBlogThis!Share to TwitterShare to FacebookShare to Pinterest
Labels: housing