Inequality: not to worry...

In my search for enlightenment on the nature of income inequality, I have run into some innovative and intriguing slants from those who don't see a big problem.  A new one, which has been approved for general consumption by some libertarian thinkers like Will Wilkinson was penned by Scott Winship.


It is not immediately clear what to think about income concentration being confined to the very top.  Would it be worse if income were becoming increasingly concentrated in the top half of the distribution at the expense of the bottom half or if it were becoming increasingly concentrated in Bill and Melinda Gates's household at the expense of everyone else?  Does the answer change depending on whether the "losers" are experiencing strong income growth or not?  On some level, as long as incomes are rising for everyone, it matters little how much more the Gates's income is rising.  They cannot price others out of markets for goods and services by themselves.  On the other hand, if the top fifth of the income distribution is pulling away from the bottom 80 percent, then the consequences for those falling behind could be profound.  The top fifth might be able to sort themselves into the best neighborhoods with the best schools, and they might bid up the cost of higher education to the point where the best schools become unaffordable to most families.

The evidence indicates that patterns of inequality more closely resemble the Gates scenario than the bifurcation scenario.  It is unlikely that the rise in inequality, then, has had much practical impact on the quality of life of middle-income or poor Americans.  The exception would be if rising inequality had spawned competitive spending patterns to maintain relative standing in such a way that families end up worse off as a consequence of trying to keep up with the Joneses.  For now, however, this possibility remains largely untested.

Finally, the magnitude of the increase in inequality and its nature might be of little practical importance even as the level of inequality has deleterious effects.  In other words, what may be relevant is that the top ten percent has received at least a third of all income in every year since 1980, not that it increased from a third to nearly half by 2007.  But if that were the case, it would have different implications for American society, politics, and economics than if growing inequality is a trend to be viewed with alarm.  Indeed, we would be in worse trouble if the levels of inequality prior to the run-up of recent decades were as consequential as the level we have today, for we are unlikely to ever see inequality levels so low in the foreseeable future. [More]


As this graph shows, his assertion (I believe) is that income gains are not being hogged by the upper 10%.  They are mostly going to the upper 1%! 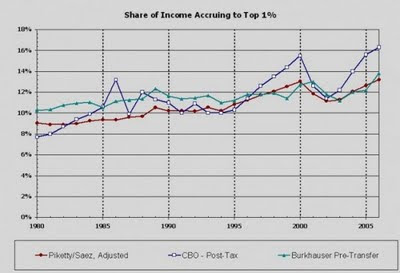 This is viewed - stay with me here - as better, for the reasons he outlines above. Indeed, the casual acceptance of this lopsided economic outcome gives one pause. As Wilkinson puts it,"And what we know is that almost the entire increase in inequality since the 1980s is attributable to a stupendous rise in incomes at the top of the top of the top of the income distribution.".

I saw Michael Swanson from Wells Fargo put the formula for GDP up in his presentation at The Elite Producers Conference:

Swanson then pointed out the key to growth in his opinion was to increase "I", investment.  OK, I'll buy that, but it's going to be really hard to move GDP much if you don't increase "C" in my thinking. 10% growth in C produces 7% GDP growth; 10% growth in I gets you 1%.

So if income is almost entirely absorbed into folks who aren't going to consume, but just invest, it will be hard to see much economic growth, simply because of the relative importance of the two factors.  This is my issue with growing income inequality.

As the folks in the dairy industry struggled to find ways to increase demand and prices, it seems stagnant income for most Americans will undo their efforts.  With flat income growth, food sellers have to take sales from housing or clothes, etc. to grow.

Maybe there is nothing morally wrong with lopsided income distribution.  Maybe it is ordained by religious adherence to Capitalism as inscribed in Leviticus or the Bill of Rights or somewhere.


But it's not going to help our economy grow.  Humanitarian issues aside, our system won't work if all of us don't see income progress.  This is the real headache for livestock and dairy.  Bill Gates can't eat all the meat and milk he can afford.

Email ThisBlogThis!Share to TwitterShare to FacebookShare to Pinterest
Labels: economics

John good thoughts! Hows harvest coming? You have mentoned in several posts about the dairy industry now and I was wondering what group you have talked to that was speciifically Dairy? If you have prevously posted sorry been busy farming. My wife says this farming thing is really starting to cut into lfe! The dairy industry has gone through probably the biggest C-change in two generations. It took 36 months to do it.
I go back to the day Doug Jackon was n market to market in Sept. 06 and pointed out that to meet the E mandates we needed more corn now. Corn took off and while for a while protien tried to keep up then the housing bubble burst and consumers did the unthikable they quit spending on FOOD. Cashflow inflow came to a halt cashoutflow doubled. At the same time credit dried up. The fallout is a western and southwest and souhteast business model ground to nothing and mid sized dairies from 500 to 2000 cows went under right away. Larger daires also had trouble(i.e. Johnson dairy of Geley COLO) Small dairies sucked it up and worked harder (JUST ask my 7 and 9 yr.old who started feeeding calves for me all summer). We went without and did more with less.
THe outcome isn't written yet here on our farm or many others however the industry as a whole is struggling with some disturbing facts.
1. We may have used all our clout up pollitically now and from here on out it will be up to us to take care of ourselves.
2. Dairy processors who expanded plants in areas that are now not viable to keep milking cows in are going to have a harder time profiting with higher transportation costs.
3. As protien production returns to the midwest protien will compete with ethanol THe issue will be land base and it will get excitng in the next couple of years. As the fertilzr gets more expensive we livestock guys will have a definite advatage and most importantly we will not be getting the indirect subsidy of cheap grain. therefore we will for the first tme in my short 37 year life span be able to GROW OUR CORN CHEAPER THAN WE CAN BUY IT! That is the definitin of a paradigm shift. Sorry for the long post To many hours by myself with cows combines and tractors! JR

I was whining about our harvest - both progress and poor yields until some stories today caused me to shut the heck up.

At least our Thanksgiving visitors can go for combine rides.

Still puzzling about fall tillage/fertilizer and 2010 crop plans. This really is far from over, at least for us.

Your comments about dairy returning to the Midwest matched remarks I heard at EPC. Thanks for the thoughts - the more the better.

Hi John. Interesting post. I encourage you to dig a little deeper into the meaning of I. Investment, as used in the calculation of GDP is not necessarily what one might think. Investment (I) is business spending, where C (consumption) is household spending. So when he recommended increasing I to boost the economy he was suggesting business hire more people and spend more on production. ie your dairy farm would be contributing to I. The general idea is that with an increase in I, more people will have jobs, incomes across the board increase and C will increase, resulting in an increase in GDP. And you are right, it is hard to boost GDP without the help of C. The scarier notion is when they try to boost GDP by boosting G! But that is a whole different topic. My husband and I enjoy your work. Thanks for sharing.

Thanks for the clarification. Actually Mike was clear about the meaning of I, but his point as a banker was people should be borrowing more money, while I was thinking why would any business plunk down money for machines, technology, etc. when nobody is talking about much gain in consumer spending. At I realize it's becoming a chicken/egg problem, but I think I will not recover until after C begins to rise steadily.

As for G, I disagree. I think stimulus and even large deficits are needed to break the downward spiral and replace C & I during a recession. I objected to unneeded deficits during the expansion.