I have been uneasy about the insistence of the protein industry that false accusations are largely to blame for the declining public image of the livestock industry.  There are more undercurrents perhaps t shifting the status quo to a new equilibrium that we currently accept.

One of these is the growing solitude of our lives.


But we live now in a climate in which friends appear dispensable. While most of us wouldn’t last long outside the intricate web of interdependence that supplies all our physical needs—imagine no electricity, money, or sewers—we’ve come to demand of ourselves truly radical levels of emotional self-sufficiency. In America today, half of adults are unmarried, and more than a quarter live alone. As Robert Putnam showed in his 2000 book Bowling Alone, civic involvement and private associations were on the wane at the end of the 20th century. Several years later, social scientists made headlines with a survey showing that Americans had a third fewer nonfamily confidants than two decades earlier. A quarter of us had no such confidants at all.
In a separate study, Nicholas Christakis and James Fowler, authors of Connected: The Surprising Power of Our Social Networks and How They Shape Our Lives (2009), surveyed more than 3,000 randomly chosen Americans and found they had an average of four “close social contacts” with whom they could discuss important matters or spend free time. But only half of these contacts were solely friends; the rest were a variety of others, including spouses and children.
Here, as on so many fronts, we often buy what we need. The affluent commonly hire confidants in the form of talk therapists, with whom they may maintain enduring (if remunerated) relationships conducted on a first-name basis. The number of household pets has exploded throughout the Western world, suggesting that not just dogs but cats, rats, and parakeets are often people’s best friends. John Cacioppo, a University of Chicago psychologist who studies loneliness, says he’s convinced that more Americans are lonely—not because we have fewer social contacts, but because the ones we have are more harried and less meaningful. [More]

This idea that animals are moving up in social status seems to me to be mirrored by the spending trends I posted earlier. Given this changed inter-species relationship, I think it will be unlikely meat sales in the US will resume any upward climb or match previous levels of per capita consumption, regardless of ambitious campaigns to "educate" consumers.

The spending stats also make doubtful the power of cheap protein to overcome emotional decisions about meat eating.  If we're spending more on pets, we obviously already have disposable income at hand that could be going to steaks.

Our future, I suspect, for protein is elsewhere, and this startling chart impressed the immediacy of the global economic rebalancing on my vision of the near future. 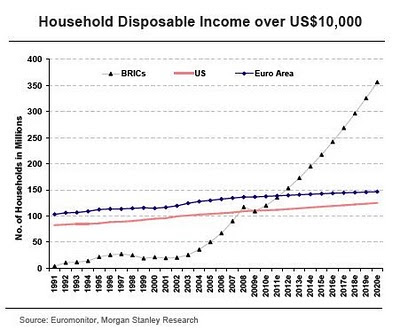 The growth in households with >$10K disposable income will be in the BRIC's (Brazil, Russia, India, China), not the US or Europe.  And it will occur in the next 10 years!

The sooner we align our protein industry to the markets of tomorrow instead of trying to argue 'round increasingly overfed consumers who see animals more as friends, the sooner we'll revive the health of this industry and reduce the friction that has produced no good result other than righteous indignation on both sides.

More importantly, an attitude of belligerence and confrontation likely contributes to the fraying of social networks and friendship (ever had a food argument over say, veganism that turned out well between friends?) One possible implication of the essay above is that groups are more likely to eat meat than loners.

There is an irresistible urge to yell back, but it could be our our worst possible choice, both economically and culturally.
Posted by John Phipps at 12:51 PM

John,,in our wesrtern world it seems opposite too China,developing counties,ect. whereas they will consume more protein when available and affordable in contrast to here where when the income level rises past subsistence living people demand and want a more specialized diet,,be it organic,exotic or something far different than our everyday foods,,,pork,chicken,beef just don't appeal to them.Having a son and DIL that are both chemical engineers and executives they and there group of friends have a very different food choices than our son and his wife who farms and can't have a meatless meal..regards kevin and glad your back blogging
,

Maybe I should try to sell my bull calves and cull dairy cows as pets. Think of the money people could save on lawn mowing.

It's hard to make comparisons to China, where there is a blurred line between money spent on pets and protein.
Dairy (Also glad you're still blogging)

Where else but at the meat counter would the results of $3.50 corn and $10.00 soybeans end up? I think the price componet is a factor along with the information in your blog. The dog being 'man's best freind' is not all that new is it?

John, thanks for continuing.