Not the only hot land market...

I have written before about the interest in Africa by nations looking to secure food supplies, but the speed of the acquisitions is accelerating, it seems.


A World Bank study released in September tallied farmland deals covering at least 110 million acres — the size of California and West Virginia combined — announced during the first 11 months of 2009 alone. More than 70 percent of those deals were for land in Africa, with Sudan, Mozambique and Ethiopia among those nations transferring millions of acres to investors.
Before 2008, the global average for such deals was less than 10 million acres per year, the report said. But the food crisis that spring, which set off riots in at least a dozen countries, prompted the spree. The prospect of future scarcity attracted both wealthy governments lacking the arable land needed to feed their own people and hedge funds drawn to a dwindling commodity.
“You see interest in land acquisition continuing at a very high level,” said Klaus Deininger, the World Bank economist who wrote the report, taking many figures from a Web site run by Grain, an advocacy organization, because governments would not reveal the agreements. “Clearly, this is not over.” [More]

While we are fixated on Asia the real frontier could be the dark continent.  Mostly because we are so poor at geography as an inward-looking profession, we miss how big a deal developing Africa could be.  Maybe this map will help. 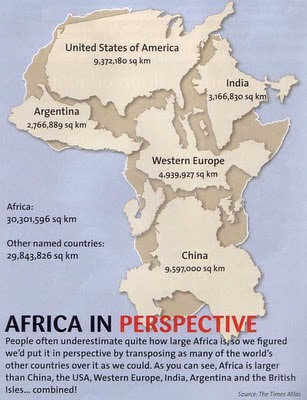 I also keep in mind that woefully underdeveloped land often experiences enormous productivity gains with the first application of ag technology. Global production will get far more lift from taking Africa to say, 50 bpa corn than the US to 200 bpa.  Not too mention the millions lifted from subsistence lives. 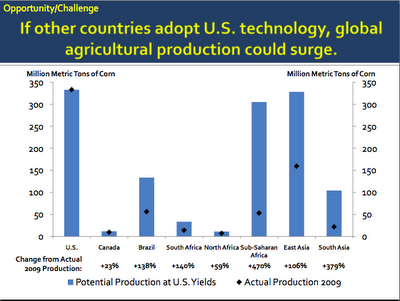 This type of development is uncomfortably close to colonialism, but I am having a harder and harder time to decide whether a colonial period is the worst outcome from countries who cannot rise above tribalism to advance.  To be sure some native culture is trampled, but any advancement would necessarily mean some losses.

It can't be any worse than the extraction industries that dominate too many poor countries.
Posted by John Phipps at 12:54 PM