After all. I have struggled to follow the line of reasoning that raising the top marginal tax rates will make rich  people "go Galt" and lay down in the harness, and in their absence we feeble ordinary citizens will be unable to propel the economy.

I'm not alone in thinking this is improbable logic.

The other mechanism that seems to be on offer is labor supply. This makes a lot of sense to me as applied to low-income people. If you work at McDonald’s or drive a taxi then you face a real choice about whether or not to increase your hours worked at the margin in exchange for more money. Driving a cab at 2AM is obviously a huge pain in the ass and not especially lucrative. To the extent that cab drivers face higher income taxes, they have even more reason not to work so late since it becomes even less lucrative. And the availability or non-availability of late night cabs has a variety of downstream impacts on bars & restaurants, drunk driving, etc.But it’s a lot harder to see this at the high end. A very large share of high-income professionals basically have a marginal wage of $0. The CEO of WalMart can’t cut back his hours by 5 percent in exchange for a 5 percent pay cut. What’s more, a lot of high-end work is characterized by zero-sum competition. It’s plausible to imagine higher income tax rates making veteran NBA players more likely at the margin to retire rather than play one more season at the minimum. But what are the downstream economic implications of Mike Bibby retiring? There overall quantity of NBA players is fixed and there are plenty of other people willing to step up and do that job. The average quality of NBA talent might decline, but so what? The players just play against each other. And it’s not just athletes. Fancy lawyers and high-frequency traders are playing against each other. Marginal changes in average quality don’t matter. If anything, reducing the average quality of America’s lawyers and finance guys would be beneficial if it inspired more people to do something else with their time.Last, of course, one of the main reasons for taxing the rich is precisely that the utility of a rich person’s marginal dollar is so low. Giving the dollar to someone else will increase overall well-being. But another implication of this is that the strictly pecuniary motivation to earn more money is already extremely weak. Whatever it is that motivates Sergey Brin it’s obviously not that he’s dissatisfied with $19.8 billion and wants more money. Plausibly he wants to get more money than Bill Gates because that would prove a point (i.e., that Google is awesome), but these pure competition dynamics strengthen the case for taxation. [More]

Many rich guys are simply lucky guys. Even in our sector. The idea that this tiny elite has to be indulged to keep their powerful job and wealth creative moxie churning out for all the rest of us morons is bogus. Others could step up when they balk at 3% higher taxes and replace them without an economic blip, I'll bet.


Besides, top tax rates are historically very low, and have been  for the last few years... 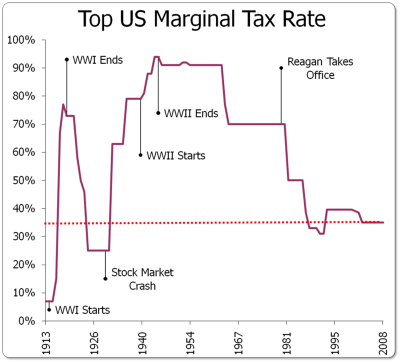 
Nope, they haven't been creating jobs, they've been investing in investing. We farmers know them as index funds, and those are not businesses that reduce the unemployment rolls.


Besides, if income is a valid tax source, then lets be clear about where the income is.


A few days ago the WSJ tried to muddy the debate by suggesting with the following chart that we needed to tax the upper-middle. 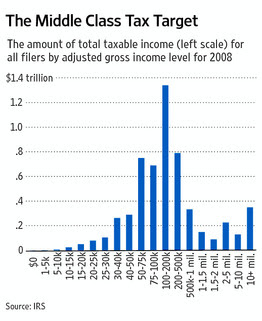 At the time, I thought this was a little fishy, especially how the income croups are divided. Sure enough, Kevin Drum revised the chart to be a little more illustrative.


Jon Chait takes a closer look at a Wall Street Journal chart intended to suggest that the middle class has all the money:


The chart has been making the conservative blog rounds, from Powerline to Hoosierpundit to Reihan Salam to (not really conservative) Andrew Sullivan, who reproduces it under the headline "Where the Money Is." The chart most certainly does not demonstrate the Journal's point. It instead relies upon an optical illusion. Democrats have been arguing that their tax increases should solely affect income over $250,00 a year. The Journal makes that pot of income appear small by divvying it up into seven different lines. See, the $100,000-$200,000 line is tall, and all the other lines to the right of it are short. That tall line must be where the money is!

As a public service, I've redrawn the chart for the Journal. On the left is the original. On the right is the chart that shows the actual amount of money earned by the tiny handful of people making over $200,000. It's a lot. 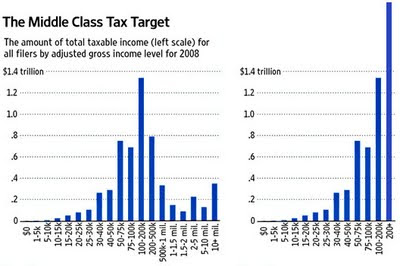 [As the WSJ drifts more and more to the model of Fox News of Finance they are going out of their way to man the barricades for the very, very wealthy.  And it's their right to do so. But I lament the loss of a formerly steady news source. At least, I'm not paying for it.]

But it would appear the rich are getting pretty nervous. Which means Republicans are getting nervous. Ezra Klein tracks down their  derailed thought train and concludes otherwise.

Leonard Burman isn’t a Republican economist, but he is a tax expert. He was actually deputy undersecretary for tax analysis in Bill Clinton’s Treasury Department. And when I reached him for comment, he found the whole conversation baffling. “You can build these models where people are very sensitive to changes in taxes,” he said, “ but in practice, there’s scant evidence of it actually working out that way. And lucky for us. If we really needed to get the tax code just right in order for the economy to grow, we’d have been in a depression for the last 40 years.”The bottom line, he says, is that these theories were tested, and recently. “In the 1990s, we raised taxes, particularly on the rich. And a lot of these people were saying our tax increases were going to kill the economy. But remember what actually happened? We got rid of our deficits and the economy grew really robustly for 10 years. And what if it happened again? We might get rid of our deficits and the economy would grow really robustly for another 10 years. Maybe it’s good for the economy to actually get the deficit under control.” [More]


I'm all for getting the deficit under control, as well as cutting spending as fast as the economy will allow (starting with ag subsidies). But pretending we cannot raise tax rates on people like me and richer, as well as eliminate tax expenditures to accomplish this long term goal is unreasonable.
Posted by John Phipps at 2:49 PM