While all bets are off in this historic event, let me lay our some information that is guiding my estimate of what could happen in the near future.

First, the unprecedented phenomenon of "The 80" 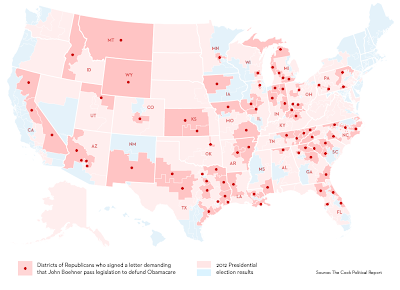 In short, these eighty members represent an America where the population is getting whiter, where there are few major cities, where Obama lost the last election in a landslide, and where the Republican Party is becoming more dominant and more popular. Meanwhile, in national politics, each of these trends is actually reversed.In one sense, these eighty members are acting rationally. They seem to be pushing policies that are representative of what their constituents back home want. But even within the broader Republican Party, they represent a minority view, at least at the level of tactics (almost all Republicans want to defund Obamacare, even if they disagree about using the issue to threaten a government shutdown).In previous eras, ideologically extreme minorities could be controlled by party leadership. What’s new about the current House of Representatives is that party discipline has broken down on the Republican side. On the most important policy questions, ones that most affect the national brand of the party, Boehner has lost his ability to control his caucus, and an ideological faction, aided by outside interest groups, can now set the national agenda. [More]

Now add in the Boehner problem. He's just not a very good or far-sighted Speaker.

Yes, Speaker John Boehner has a very hard job. He is leading a party riven by conflict. He is mistrusted by the Tea Party. He's found that he has to lead from behind lest he watch his initiatives fail on the floor of the House.But Boehner routinely makes his job harder than it needs to be. He didn't have to go around irresponsibly promising his members a "whale of a fight" on the debt ceiling. He could bring legislation to the floor with Democratic votes and, if that endangers his speakership, he could try to cut a deal to keep control with Democratic votes. He could also simply try and govern in a more responsible way and, if that means losing his position, so be it. If Boehner wanted to, he could cut deals to pass comprehensive immigration reform, a grand bargain on the budget and the permanent end of the debt ceiling. All that might mean that is he's not speaker in 2015 and is, instead, a rich lobbyist, or a well-paid university professor, or a member of multiple corporate boards, or maybe even just a member of the House of Representatives. It's not such a horrible fate. [More of a really helpful analysis from Ezra]

One other factor I just ran across this morning. Compromise is not favored. At least, not yet. 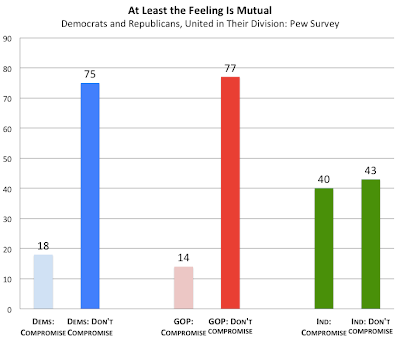 Americans are perfectly, identically, symmetrically split on whether the GOP is justified in demanding major changes to Obamacare in exchange for funding the rest of the government, according to a new Pew Research poll. It's just another reason why this shutdown isn't likely to end any time soon.Asked whether Obama should agree to a shutdown deal that includes changes to his health care law, the "yes" responses among Republicans, Independents, and Democrats went 77 percent-40 percent-18 percent. Asked whether the GOP should agree to a deal to fund government without health care changes, the R-I-D responses were practically palindromic: 14 percent-43 percent-75 percent. [More]

Finally, I have come to believe the idea of sending the economy down the tubes is not all that abhorrent to Republicans as they feel it will be attached to Obama. lacking apparent economic savvy and dependent of simplistic economic analogies like comparing the government to a family, they have no idea how disastrous slipping back into recession would be, or how few arrows we would have to slay the bear again.

While I think the economy can take an considerable blow from Washington, should it truly lose all growth momentum, I am deeply concerned about the possibilities. Perversely, I find myself almost wishing the R's would rediscover in a hurry why Hoover was wrong so long ago should that awful outcome arrive and they assume full control of government.

The ensuing recession will not be solved by slashing taxes and regulations, cutting entitlements, and balancing the budget. We may get to watch that happen, however.

While I still believe in powerful self-righting forces of our system, they unimagined political characteristics of today's Washington have negated many of those historic tools.

Email ThisBlogThis!Share to TwitterShare to FacebookShare to Pinterest
Labels: politics

It's interesting to note that there have been no comments on this piece and no comments at all since 9/25. You need to stop reading Ezra! Do you really want someone more right than Bohner? And do you really think the R's alone caused this problem? That Reid isn't equally to blame as is Obama?
Does the budget have to have defunding of Obama care--NO
Does the debt ceiling need to be raised without some spending changes--YES
Are changes to Obama care necessary--YES
And Obama and Reid need to acknowledge this and start working with the rest of Congress.

1. No posting equals no traffic equals no comments as a rule

2. If you find errors in my links to Ezra please let me know. Like Nate silver many on the right don't like his work but he realy saves me time.
3. You ascribe a false equivalency. Note your own list. R's are asking several policy changes and willing to give only one thing: not tanking the economy. Can you offer any policy changes they will exchange. think it is fair to call this extortion and it is not equal blame, IMHO.
4. The wsj actually said it best- the way to change policy is to win elections. If republicans want the powers of a majority they need to be a majority.

Keep writing and thinking John. I am still out here reading and checking every day. Mark

House Republicans are holding America hostage. They have adopted the tactics of insurgents, using asymmetrical warfare. Shutting down the government and threatening to blow up the economy because of their disdain for Obamacare and all things Obama. It is a shameful display of childish behaviour, and puts us all at great economic risk of recession or even worse.
Dean

One question. How much debt can US substain? 25 trillion? 50 trillion?
Kevin