Every morning I check Bloomberg to see how much those darn interest rates have shot up.

This shouldn't be happening. 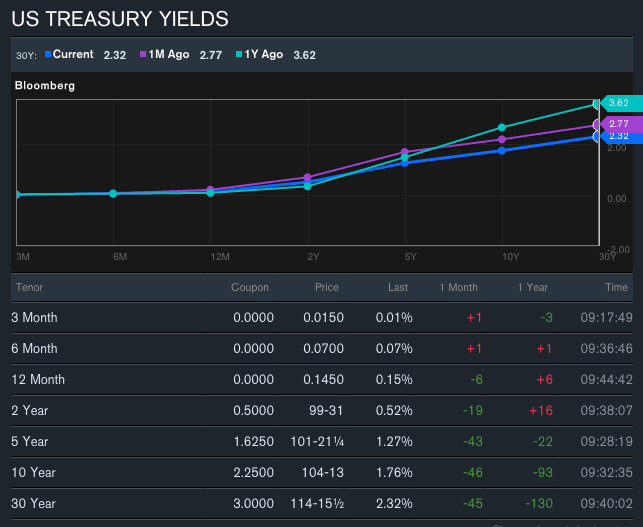 Lessee - 10-yr bonds heading toward 1%; 30-yr toward 2%.  And I wet myself a little when they broke 3%.  Should have read my own astute thinkings on interest rates.  (Which of course was a guess like everybody else's)

So how puzzling is it that the CBO - admittedly a few months ago  - decided to use this projection for interest rates. 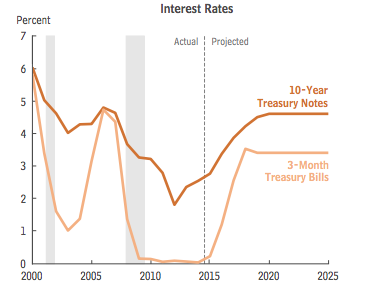 As I said, this was done in Nov 14 so it's already wrong, but what could make rates jump as shown above that I can't see coming?

Well, I'm not the only one puzzled.


The actual arguments in the body of the report contradict elements of this forecast, however. It’s quite possible that, for at least a few years before the next recession, the combination of strong growth and previous austerity measures will combine to produce a budget surplus and an associated scarcity of safe assets. [More, highly recommended]

While I think this is an extreme long-shot, it is NOT unthinkable. And as European yields continue to set multi-century lows, it's hard to find those forces that will counter the slow slide of US Treasuries yields.

Can you imagine the heads exploding in Washington if Klein (above) is even close to correct? An Obama surplus???  WTF??