I keep looking for some indication that the public is coming 'round on GMO's. If they are, I haven't seen the evidence. In fact, it looks to the contrary: 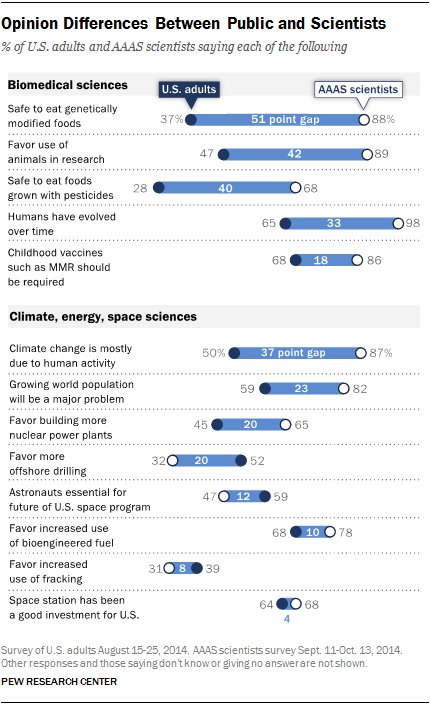 Note that GM food has the largest public-science divergence. Bigger than climate change.

I have two reactions. First, this issue may be simply carried along in the tides of science disdain indicated by other specific controversies above. Climate, vaccinations, GMOS's, etc. are all part of a larger holistic problem for many perhaps.

But it could also be that GMO's are the heavy lifter for the anti-science crusaders. Like nuclear power, which never really cleared escape velocity, rejection of the evidence of GMO safety seems to be an enduring, possibly even strengthening popular sentiment.

All this can be more than a little discouraging. We've been "telling our story" like crazy. And without any positive results, and possible the opposite.

Second, we don't seem to have any viable tools to change these attitudes. In fact, it appears altering public attitudes its getting harder, much harder.

Last month, Brendan Nyhan, a professor of political science at Dartmouth, published the results of a study that he and a team of pediatricians and political scientists had been working on for three years. They had followed a group of almost two thousand parents, all of whom had at least one child under the age of seventeen, to test a simple relationship: Could various pro-vaccination campaigns change parental attitudes toward vaccines? Each household received one of four messages: a leaflet from the Centers for Disease Control and Prevention stating that there had been no evidence linking the measles, mumps, and rubella (M.M.R.) vaccine and autism; a leaflet from the Vaccine Information Statement on the dangers of the diseases that the M.M.R. vaccine prevents; photographs of children who had suffered from the diseases; and a dramatic story from a Centers for Disease Control and Prevention about an infant who almost died of measles. A control group did not receive any information at all. The goal was to test whether facts, science, emotions, or stories could make people change their minds.

The result was dramatic: a whole lot of nothing. None of the interventions worked. The first leaflet—focussed on a lack of evidence connecting vaccines and autism—seemed to reduce misperceptions about the link, but it did nothing to affect intentions to vaccinate. It even decreased intent among parents who held the most negative attitudes toward vaccines, a phenomenon known as the backfire effect. The other two interventions fared even worse: the images of sick children increased the belief that vaccines cause autism, while the dramatic narrative somehow managed to increase beliefs about the dangers of vaccines. “It’s depressing,” Nyhan said. “We were definitely depressed,” he repeated, after a pause. [More]

OK, let's get past the moaning and figure out what this means to our respective business plans. I'm thinking we get out of the GM promotion racket. If this was a side enterprise on our farm, results like above would have pulled the plug on persuasion long ago. I suppose as long as Monsanto et al, are paying for it, what the heck?

I'm ready to stop pouring time and political capital down this lost cause rathole. Despite frantic pleas from our suppliers, I don't see strong efforts to outlaw GMO's on the most distant horizon. The effect will probably just show up in consumer preferences in the marketplace. And we are not moving that needle in the right direction.

I also think GM inputs could be revealed as luxury items as corn slides toward $3. Maybe it is great stuff, but it's rapidly becoming great  stuff I can't afford. US producers have "scienced" themselves into high-cost producers, and unwinding that economic misstep will be ugly.

So I think I'll listen to my customers, push back against my suppliers, and treat this debate as just another economic challenge. I can live with or without GM products.

The public won't respond till it hits them where it hurts-just like Obamacare. I admit the milk-bst issue did nothing other than take away an economic advantage we could have really used in tough times. Science matters little to an affluent society. Steve

While there are many outside industrial ag who oppose the use of GM crops for human consumption, I think that there is another over looked group that encompasses folks both within & without industrial ag who oppose the use of GM crops. We see the use of GM crops as neither economically nor environmentally sustainable. The short term cost of inputs is to high - as you observe. But, the long term costs are also prohibitive. The proliferation of resistant weeds has come in tandem with the proliferation of GM crops. This creates the very real prospect of necessitating a return to mechanical weed control. Not only will this raise production costs, and thereby consumption costs, but it will also diminish the positive gains of no-till & strip till practices such as accelerated loss of top soil. Trait seed looked great in the beginning, but 20 years on significant problems are being recognized.

And, for every farmer who rationalizes that it is the Monsantos of this world who are paying for the promotion of GM crops to the consuming public, I have a notion for your consideration. These seed companies are promoting GM crops to the general public through advertising campaigns. They pay for these campaigns with their revenues. Farmers buying their seed & related products create their revenue streams. So, who really is paying for these ad campaigns? (I think this could be considered as a corollary to the idea of robbing Peter to pay Paul/)

Indeed...people are smarter than the scientist. I will be you non of the scientist have these gmo foods in their home nor give to their children...ditto for the companies selling the food. a sad sad fact. household of doctors.