Propane is essentially a byproduct of oil and NG production.


Propane is produced as a by-product of two other processes, natural gas processing and petroleum refining. The processing of natural gas involves removal of butane, propane, and large amounts of ethane from the raw gas, in order to prevent condensation of these volatiles in natural gas pipelines. Additionally, oil refineries produce some propane as a by-product of cracking petroleum into gasoline or heating oil. The supply of propane cannot easily be adjusted to meet increased demand, because of the by-product nature of propane production. About 90% of U.S. propane is domestically produced.[citation needed] The United States imports about 10% of the propane consumed each year, with about 70% of that coming from Canada via pipeline and rail. The remaining 30% of imported propane comes to the United States from other sources via ocean transport.After it is produced, North American propane is stored in huge salt caverns. Examples of these are Fort Saskatchewan, Alberta; Mont Belvieu, Texas and Conway, Kansas. These salt caverns were hollowed out in the 1940s,[10] and they can store 80,000,000 barrels (13,000,000 m3) or more of propane. When the propane is needed, much of it is shipped by pipelines to other areas of the United States. Propane is also shipped by truck, ship, barge, and railway to many U.S. areas. [More]

I have anticipated prices to drop every since North Dakota became the Saudi Arabia of the US.  But infrastructure to capture, clean, and store propane takes time to get going. Perversely, dropping prices makes that investment more unfavorable.

And boy have prices dropped! 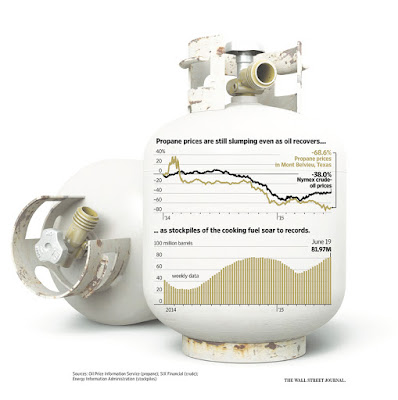 Anyhoo, this is all well and good, and comforting to free marketeers, but am I the only one to be a little taken back by a price of 32¢?

Crimony, I don't think beer has this good of a markup. (No, a bartender friend told me beer was 99% profit) To be fair, I just had a summer fillup and including taxes, it was under $1.10. So no gripes from me.

I do wonder how guys installing massive tanks after the shortage in the winter of 2013 (?) when it flirted with $5/gal. feel about this.  the payback just got waaaay longer.  But the intial fill looks more manageable.

And with the way this growing season is splashing along, we may need a bunch of drying.
Posted by John Phipps at 4:31 PM

Thanks for the info on the LP market. I called supplier here near Decatur, Illinois. Summer fill is under a buck after discount, before tax. Winter contract still about $1.25.

If Alcohol was as generously low priced as Propane, Hank Hill would have been floored. And, with Iowa trying to make a run at being a New Age Beer State, there would have been someone who would have tried to pull Brian McGhee, like Homer Simpson in Duffless as if they where truly responsible adults. Even though they'll tighten diplomas and call kids adults if they don't do school right, have legal issues, or have to work in commission , but, that's a longer issue for a future future. Frankly, if being reckless is the name of this day, problem solvers would need vs. another Payday like Nick Young for the LA Lakers.