For those of us handicapping the election, the turnout for younger people has been of great interest.  Will it actually happen (for once)?


Many a political campaign has been premised on the idea of motivating and turning out young voters; most have failed. If the young voter ruled American politics, George McGovern would have walloped Richard Nixon, and Howard Dean would be finishing up his first term.

Indeed, youth turnout rates in recent elections have been downright pathetic. In 1972, the first year 18-year-olds had the right to vote, nearly half of citizens aged 18-24 turned out to the ballot box. But by 1976, with the Vietnam War off the table, the turnout rate plummeted to 42%. It has since fallen as low as 32% in 2000 before rebounding slightly in 2004.  [More] 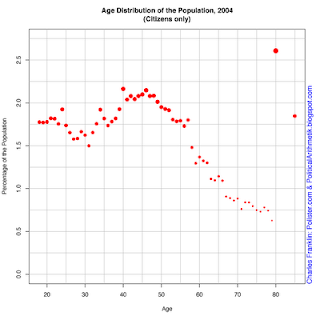 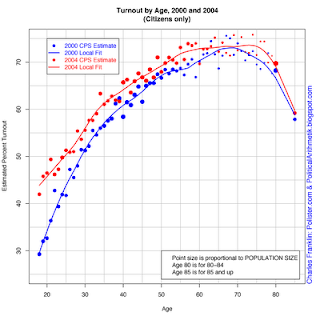 [More of a concise analysis]
In a superbly straightforward explanation of who is how old and what they do with their votes, Political Arithmetik sheds much needed light on the subject.


The Obama campaign may be right that they can gain votes by mobilizing the young. But the old play a bigger role in elections, and they are not imovable in their vote preferences. Indeed, they make the youngest group seem a bit static by comparison. It is not the candidate's age that will be the key to winning the votes of those 60 and over. Issues and personality will play a large role. Any candidate would be well advised to recognize that the dynamic swings among older voters coupled with their substantial over-representation makes them a potent force for electoral change.

A large turnout of younger voters has to occur eventually. But if it begins this year to shift the focus of political campaigning, I think we look experience modestly longer planning horizons for once, insted of what are you doing for me right now.  Squeezing baby boomers out of the spotlight would be a relief to all the other age cohorts and I suspect, even a relief to many of us.
Posted by John Phipps at 8:54 AM

Ahh..Youth, the prime of life. Just Graduating, full of Fire and Vinegar. Listening to loud music and going to change the world...
Now the big concern is will this make me irregular and talk radio on most stations we listen to .??