Posts about income or asset ownership equality always hits reader nerves.  Since I last discussed my own thoughts the topic has taken on renewed interest in light of the semi-spontaneous "Teabagging Tea Parties*".


Last but not least: it turns out that the tea parties don’t represent a spontaneous outpouring of public sentiment. They’re AstroTurf (fake grass roots) events, manufactured by the usual suspects. In particular, a key role is being played by FreedomWorks, an organization run by Richard Armey, the former House majority leader, and supported by the usual group of right-wing billionaires. And the parties are, of course, being promoted heavily by Fox News. [More]

Luckily, right now Lane Kenworthy is collecting and analyzing this issue is what seems to me to be an even handed manner. Like me he has questions about whether inequality is a problem and how much.

Is this really a problem? Would it be better if income inequality were reduced? I think so, for the following reasons.

1. Fairness. Market processes have produced enormous incomes for various financial operators, CEOs, entrepreneurs, athletes, and entertainers in recent decades. A good bit of this is due to luck—being in the right place at the right time, genetic talent, having the right parents or teacher or coach, and so on. I don’t mind some inequality due to luck, and I recognize that monetary incentives are helpful. But the current (or recent, I should say;  the downturn will reduce top incomes somewhat) magnitude of inequality in America strikes me as unfair. An income of several hundred million dollars when the minimum wage gets you about $15,000 is too much inequality. What’s the proper amount of income inequality? I don’t have a precise answer, but that doesn’t mean it’s wrong to feel that our current level is excessive.

2. Inequality’s consequences. Even if you don’t worry about exorbitant incomes in and of themselves, there’s no avoiding the fact that they have consequences for the incomes and well-being of Americans in middle and lower parts of the distribution. The social pie isn’t zero-sum. But our economy hasn’t grown faster in the past few decades than it did before, so the dramatic jump in incomes among those at the top has come in part at the expense of the rest of us. The following chart offers one way to see this. It shows GDP per family and median family income over the past six decades. Relative to growth of the economy, incomes in the middle (and below) have increased slowly since the 1970s. [More of the first post] 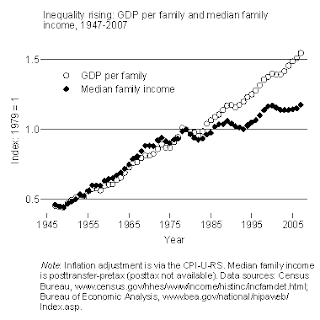 [Note the graph is indexed to 1979, so the divergence is the key aspect of value - not the values so much.]

Lane goes on to discuss the linkage with unions, education, and globalization as well.  I found myself in substantial agreement with many of his conclusions.  Especially on the topic of whether inequality is even much of a real problem.

All of these posts are helpful, but when the best graph I have seen to date seems to obliterate the argument rich folks are carrying the rest of us when all taxation is considered.  This is because state taxes - especially sales taxes - are regressive, hitting lower-income earners hardest.

Data released last week by the Congressional Budget Office underscored the progressive nature of the federal tax system. And in an op-ed article today in The Wall Street Journal, Ari Fleischer, who served as President George W. Bush’s press secretary, used that data — in particular, the income tax numbers — to argue that the wealthiest Americans bear an unfair share of the tax burden. Other research has found that many states and local governments have more regressive tax systems, though, that might offset the progressiveness of federal tax rates. [More]

It's hard to make the case the rich are disproportionately burdened looking at that distribution.
But what still puzzles me is how farmers embrace completely contradictory positions on inequality.  For example, while we seem to be willing to go to the wall to help a few dozen extremely large farms avoid inheritance estate taxes (no, they are not "death" taxes), we get pretty exercised as these farms begin to grow and occupy much of the plat book.

I mean, how hard is it to connect those two dots?

Now add in the outrage over CEO compensation and bailing out "fat cats".  Assailing those actions offers no clear alternative to ending the abuse. What corrective measure would such critics support that would not look like a step away from sacrosanct no-holds-barred capitalism?


For the most part, many farmers are simply being tools for the the rapid consolidation in our industry.  With medium sized farmers carrying the water for the tiny number of huge operations, I can only assume they truly believe they will be some of those few survivors.

I admire their moxie, question their math.

One thing many people don't think of in regards to the inheritance tax is that when an estate is valued for that purpose the basis is changed and if heirs decide to sell much less capital gains are paid. This could be huge on the small estates that would not pay inheritance tax but would pay capital gains.

Trusting government to equalize the vicissitudes of life is a pretty scary thing. I have seen it fail in federal farm policy, education policy, and in public housing policy. I much rather government focus on protecting my freedom to pursue opportunity, rather than guaranteeing me some measure of success.

As Teddy Roosevelt said "it is a very bad thing for every one if we make men feel that the same reward will come to those who shirk their work and those who do it. Let us, then, take into account the actual facts of life, and not be misled into following any proposal for achieving the millennium, for recreating the golden age..."

Man in the Arena speech, 1910 (One of the best speeches ever given IMHO)

It's interesting that both liberals and conservatives are pining for the 1950's, albeit for mirrored opposite reasons. Liberals want to go back to quasi-confiscatory tax rates on high incomes, but want to keep (and expand) modern social freedom. Conservatives want to go back to the traditional social mores, but keep (and expand) current economic freedom vis a vis tax rates.

Government is a blunt and, more importantly, ineffective instrument for redistribution, because of all the perverse incentives involved in the process. Society, however, can be more effective.

Since the 50's, society has traded the values of conformity, personal restraint, and community for values of personal expression, freedom of choice, and individuality. This is most obvious in the values reflecting individual sexual autonomy, but also relates to money. As our society has devalued our obligation to others while exalting individual espression and fulfillment, many of the social and moral restraints on personal financial profligacy are gone.

There are pros and cons to this societal evolution, but it is clearly one of the drivers of both perceived inequality and actual super high-end incomes, whether in commerce or arts and entertainment.

Interesting (frustrating?) thing for me this year on taxes are my pay amounts at different levels. I am married with 3 kids; I do not farm myself, but am an office manager. I work in a town of about 12,000 people. This year, I paid more in city taxes than I did in either federal or state. How crazy is that?

Great comments - thanks, but this engineer is looking for something a little more actionable.

Is our current level of inequality too high - if not, what distribution would be? Or is there any upper limit? Or like some global warming arguments can we only lament and adapt?

We all have pet theories why we inequality occurs and prejudices about what tools should/should not be used to address it, but I'm getting the impression there is little interest in slowing the concentration of wealth until it affects our own piles of loot.

For my money, I think we are approaching or currently have a problem based on the fact, that the last time we saw this level of inequality was the Roman Empire. My guess is there is a good reason why.