It could be worse...

I've been hearing some grumbling about all the hassle at the FSA for signup.  And your humble correspondent has been known to point out certain flaws in the USDA.

But how do USDA employees rate their department?  Or how does the USDA compare as a place to work with other agencies?

Every other year the Office of Personnel Management conducts a mammoth survey of the federal workforce. From the responses of more than 200,000 federal employees, the OPM calculates agency-by-agency scores on four dimensions: leadership (which indicates how favorably employees of an agency regard their leaders), performance (which indicates the extent to which employees believe their agency promotes improvements in processes, products, and services), talent (which indicates the degree to which employees think their agency has the talent needed to achieve its goals), and job satisfaction (which indicates how satisfied employees are with their jobs). In the 2008 survey, the results of which were released a couple of months ago, 37 agencies were rated.

The official release of the results listed only the agencies that placed in the top ten of each of the four categories, apparently to avoid embarrassing the bottom-dwelling agencies. Joe Davidson of the Washington Post subsequently obtained the complete lists, which included all 37 agencies, and identified the bottom ten on each dimension as well as the top ten in a piece in the Post. He also put the full listings — ratings as well as rankings — for all 37 agencies available online. [More] 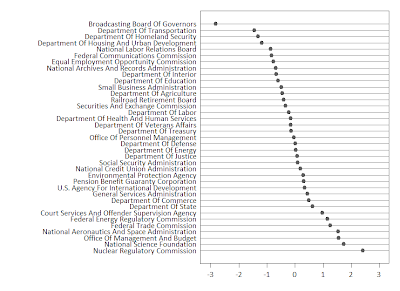 [Click to enlarge]
Unsurprisingly, nukes rule.  But it is something to remember when dealing with USDA employees that they do not rate their own department as highly as other agencies.
Perhaps they too realize the hypocrisy of most farm programs.
Posted by John Phipps at 6:00 AM

Email ThisBlogThis!Share to TwitterShare to FacebookShare to Pinterest
Labels: government

Remember this is USDA as a whole, not just who you deal with. WDC and KC employees as a whole are not as happy as county office people. In Washington especially you have a large majority of urban workers who know nothing of agriculture and they really do not like "a bunch of rich white guys getting all this money" that is a quote that was once said to me and a whole group around this person agreed.

The $500,000 gross limit was first proposed by career USDA employees in WDC. They also will tell you that USDA is a racist organization. How can it not be when very few minorities get payments.
This survey also includes meat inspectors, forest service employees (largest employer in USDA, fighting forest fires), foreign ag service, rural development,etc., etc., etc.
Also , I know very few happy former FMHA employees, they were split apart and about half went to rural development and halh went to FSA. Alot of them would like to go back together.
I could go on and on, but USDA is so much more than just farm program payments.

There is so much more I could add, but it is too early in the morning to get deep into this.

Remember how many people work in USDA? About 1/3 in Washington, 1/2 in Kansas City, 3/4 to 7/8 in most state offices and just about everybody in county offices.

I think it's a reach to say they rate their agency poorly because they don't believe in farm program supports. I wonder what percentage of those working for USDA in DC know what the farm program even is.

Thanks for your insider perspectives. I use words like "perhaps" to indicate speculation on my part, certainly not all of which turns out to be true.

On the other hand, the same arguments about your department rating could be applied to other departments as well, such as HHS. If the survey is consistent, the results should indicate something about comparative attitudes.

Difference between USDA "headquarters" employees and other agencies is that people who work at alot of other agencies know something of what they are working on. Space agency has scientists that know space for an example, in the agricultural areas of USDA you have alot of workers that have no understanding of commercial production agriculture.

Even alot of high level political appointees do not have a clue about how or what farmers really do.

Farming has changed tremendously in the last thirty years. Problem is most farmers are too close to see the changes since this happens a little at a time.

I cannot express how the USDA employees have what they think is what farming really is in their head, but they have no clue.

I have seen inside data, County Office people are happy they just wish people up the line would better understand what they have to do, but I also know the average USDA employee does not understand the big picture politics in much of what they do.

Just remember the "average" WDC employee went to Georgetown whereas the average farmer went to a community college followed by a Texas A&M type college.

Worlds apart. Until you have been on the inside and high enough up but not too high up to not be able to see a county office in action, buy also "experience" Washington you would understand.

It is getting later in the day.

Thanks for your posts

I agree the survey is USDA, not FSA, so extrapolating is difficult.

I'd also point to the differences within FSA. On the program side most came from county offices (as of 12 years ago, anyhow). On the administrative side few or any did. During my time in ASCS/FSA I knew admin types who worked hard (disclosure-I spent my first 10 years on the admin side) and program types who were pretty useless (spent the rest of my career on the program side).

I think during the 60's-90's, the agency would mobilize around the goal of getting a new program implemented and checks out the door. That was pretty easy--admin and program types could both see the urgency and rally around the flag. Other stuff was harder.