Is it logical to connect these two dots? 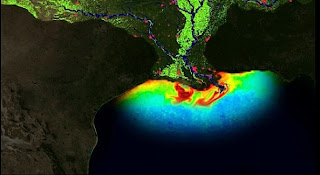 The infamous Gulf of Mexico dead zone looks smaller than predicted this year, but scientists say the reprieve is just temporary, and barely even a reprieve. Some worry that more pollution could cause the Gulf’s ecosystem to collapse.
“We’re in a condition in the Gulf of Mexico that indicates we might be near some sort of tipping point, but you don’t really know it until it happens,” said Nancy Rabelais, director of the Louisiana Universities Marine Consortium.

The federal National Oceanic and Atmospheric Administration released the dead zone data Tuesday. Caused by farm fertilizer runoff that feeds algae that in turn feeds oxygen-gobbling bacteria, the dead zone has covered an area the size of New Jersey for the last several years. This year, unexpected weather patterns — rather than a drop in pollution — have cut its surface area by half. [More]

Of course, whether farmers see a connection is not nearly as important as whether regulators do.
Posted by John Phipps at 6:34 AM

How interesting. About 10 years ago a local university did a multi year stream study on a small creek flowing through our farm. They attempted to monitor nutrient loss from the fields to the stream. They were able to pick up the year I fall applied manure as opposed to my regular practice of spring applications. Regardles of timing, the manure was incorporated immediately. This was a double blind study in that I did not know they were doing a study, and they did not know anything about my cultural practices. We only compared notes after their study was finished and ready for presentation. The research was presented to the Pa Science association, but was never published as the results do not support the claims and desired practices of the environmental movement. My nutrient losses were less from the most concentrated livestock operation in the watershed, than the nutrients lost through the desired reparian buffers.

I beleive that it has been established that Phosphorous and not Nitrogen may be causing the algae bloom in the gulf.

I have to believe that switching to no-till will reduce the dead zone more than any single factor other than getting people to stop fertilizing their lawns. In our area, it is important to NOT incorporate manure as this exposes more soil particles to erosion, and the nutrients are attached to that soil.