Get a load of the power of the "civilization drink": milk.

One of the reason the sight of Visigoths coming over the hill toward them was pretty unnerving to Roman soldiers was the dudes were huge - relatively speaking.  And all because of a tiny evolutionary mutation and the ultimate secret weapon - the cow.

The new settlers also had something of a miracle food at their disposal. They produced fresh milk, which, as a result of a genetic mutation, they were soon able to drink in large quantities. The result was that the population of farmers grew and grew.
These striking insights come from biologists and chemists. In a barrage of articles in professional journals like Nature and BMC Evolutionary Biology, they have turned many of the prevailing views upside down over the course of the last three years.
The most important group is working on the "Leche" project (the name is inspired by the Spanish word for milk), an association of 13 research institutes in seven European Union countries. The goal of the project is to genetically probe the beginnings of butter, milk and cheese.
An unusual circumstance has made this research possible in the first place. Homo sapiens was originally unable to digest raw milk. Generally, the human body only produces an enzyme that can break down lactose in the small intestine during the first few years of life. Indeed, most adults in Asia and Africa react to cow's milk with nausea, flatulence and diarrhea.
But the situation is different in Europe, where many people carry a minute modification of chromosome 2 that enables them to digest lactose throughout their life without experiencing intestinal problems. The percentage of people with this modification is the highest among Britons and Scandinavians (see graphic). [More of a must-read for any dairy producer] 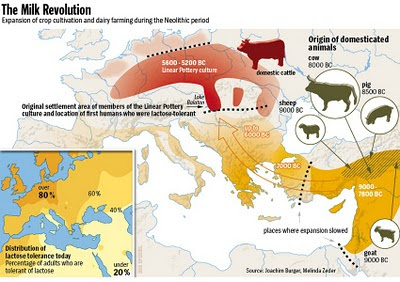 [Click to embiggen]
The ability to tap into this mother-lode (heh) of protein and fats helps me understand why dairy farming is deeply woven into the tradition of  agriculture of Northern Europe. (Check out the slopes they graze in Switzerland, for one extreme).  Milk literally made them the people they are today. 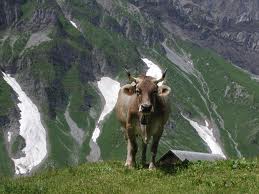 [Source]
Not only could cows utilize some pretty marginal terrain, but the invention of cheese provided a storage and nutrient concentration method that further exploited this food source.  This evolutionary advantage we take for granted is also one big headache for the global future of lactose-purveyors as much of the population growth is not occurring among milk drinkers.
Experts disagree on the extent, but it also adds into the reason the Dutch (big dairy consumers) have shot past Americans as the tallest people in the world, although superior pre- and post-natal and genetics care are likely much bigger factors.

While obesity has tripled in many Western European countries since the 1980s, the Dutch keep growing upwards. The average height is now 6 feet 1 inch for Dutch men and 5 feet 7 inches for Dutch women. So why are the Dutch so tall? Theories abound. An often-heard argument is the Dutch love of dairy and their protein-rich diet, but there are also serious studies that look at height differences, and the Dutch pop up time and again in many of them. [more]

now I know why we do this 24/7! to keep the world safe! we should tap into some homeland security $
steve