My drinking is not a problem... 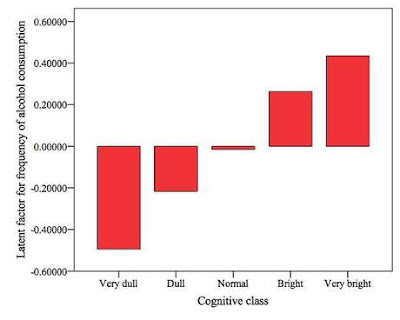 It is important to note that both income and education, as well as childhood social class and parents’ education, are controlled in multiple regression analyses of these data from the US and the UK.  It means that it is not because more intelligent people occupy higher-paying, more important jobs that require them to socialize and drink with their business associates that they drink more alcohol.  It appears to be their intelligence itself, rather than correlates of intelligence, that inclines them to drink more. [More]


It's what Oakeshott called "the ordeal of consciousness." When you have constantly charging brain, you need to shut it off sometimes in order to breathe and live. It's no wonder so many brainiacs self-medicate in this way. The key thing, as always, is moderation. [More]

Ah yes - moderation.  Which is in the eye of the beholder, I have discovered.
Posted by John Phipps at 6:18 AM