In the bombardment of political commercials and heated charges, I had bought into the idea myself that federal spending was zooming upward at an unprecedented rate.  After all, we had a deep recession, wars, and etc.

But guess what?  While certainly going up, it is not accelerating. 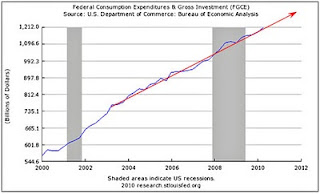 This is with a log-scale. Why logs? Because with logs a straight line means a constant growth rate. In a world where population and productivity are always growing, virtually any long economic series is going to look like a giant swoosh. That’s just because America is much bigger now than it was in the 50s. [More]

Spending is growing, but at a surprisingly consistent rate.  The deficit problem that faces us largely due to the failure of government revenues to grow apace. Hence the term recession - duh! 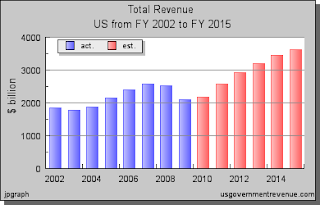 With all the talk of runaway spending, it may be less the threat right now than getting revenues up by growing the economy.  Hence the rising concern with anemic growth.

I'm all for cutting spending, but so far I haven't heard any modestly detailed ideas about where to start other than the detail-free ideas by Rep. Ryan.  It's a good opening statement, but handing out vouchers instead of Medicare looks dead in the water to me.

For all the hype I still think Bruce Bartlett has it right - the bond market will tell us when we really have to make income and expenses come closer together. In the meantime, a little factual background on what federal spending is really doing couldn't hurt.
Posted by John Phipps at 6:01 AM

What an extremely bogus chart drawn up by the Dept. of Commerce. John, I am surprised you would link such a thing.

While the chart has 8 evenly spaced sections on the vertical axis, the $$$ each space covers is different. The chart begins at $57.2 Bil with the lowest section and ends with 115.4 coverage for the top section, more than double!

I am not saying an accurately drawn chart would change the conclusions, but I do know the arrow would defintely be pointing in a different direction.

My 5th grader would have received a failing grade if he turned in this chart in math class....although, it may be different in an economics class.

Jake, John was emphasizing the slope of the line which is rate of growth and this has not increased. Take another look at the graph.

Please note the caption and check out the link. The vertical axis is logarithmic (log) not linear. This means when a line is straight the rate of change like 2% per year is constant.