This is exactly the kind of sloppy statistical writing that drives me nuts.  The topic (farmer suicide) looked (and is) serious, but as I read it became apparent the writers weren't interested in framing the numbers in a way that would be helpful to readers.


Since that crisis, the suicide rate for male farmers has remained high: just under two times that of the general population. And this isn't just a problem in the U.S.; it's an international crisis. India has had more than 270,000 farmer suicides since 1995. In France, a farmer dies by suicide every two days. In China, farmers are killing themselves to protest the government's seizing of their land for urbanization. In Ireland, the number of suicides jumped following an unusually wet winter in 2012 that resulted in trouble growing hay for animal feed. In the U.K., the farmer suicide rate went up by 10 times during the outbreak of foot-and-mouth disease in 2001, when the government required farmers to slaughter their animals. And in Australia, the rate is at an all-time high following two years of drought.Robert Fetsch, a retired professor of human development and family studies at Colorado State University, says there are profound social reasons farmers are reluctant to seek help. "Farmers are extremely self-sufficient and independent," he says, "and tend to work around whatever they have, because they are so determined to keep moving."One factor disputed among agricultural and mental health professionals is the connection between pesticides and depression. A group of researchers published studies on the neurological effects of pesticide exposure in 2002 and 2008. Lorrann Stallones, one of those researchers and a psychology professor at Colorado State University, says she and her colleagues found that farmers who had significant contact with pesticides developed physical symptoms like fatigue, numbness, headaches and blurred vision, as well as psychological symptoms like anxiety, irritability, difficulty concentrating and depression. Those maladies are known to be caused by pesticides interfering with an enzyme that breaks down the neurotransmitter that affects mood and stress responses."A lot of farmers are very familiar with the pesticides, so they sort of take it for granted," Stallones says. "It's an invisible kind of thing, so if you can't actually feel it, taste it, touch it, you might not believe it's an issue."Not everyone is sold on the link between pesticides and depression. "I don't think there's firm data on that yet," says Jill Harkavy-Friedman, senior director of research at the American Foundation for Suicide Prevention. A greater contributor to suicide in rural areas, she says, is the easy access to guns. According to the Centers for Disease Control and Prevention, most suicides in America involve firearms, and more than half of all firearm deaths every year involve suicide. Harkavy-Friedman points to a 1998 study published in The British Journal of Psychiatry that showed the most common means of farmer suicide in England and Wales from 1981 to 1988 was guns. Following firearm legislation in 1989 that reduced access to guns, the total number of farmer suicides went down. [More]

I should have seen it coming from the extravagantly photoshopped cover, but it really begs to be given context.  Which is why God gave us Google.

First off, the article tells a few stories about tragic suicides.  Fair enough, but those anecdotes prime us for interpreting any numbers as pessimistically as possible. The note the comparisons without any total. 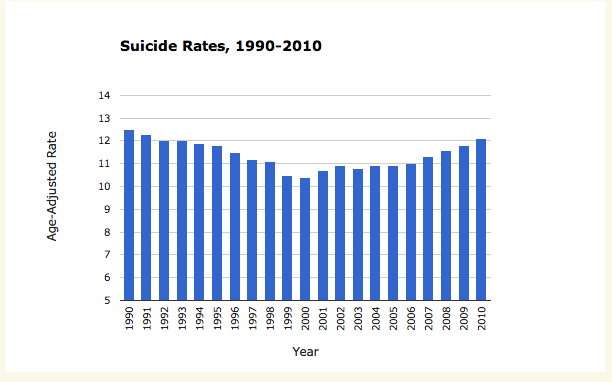 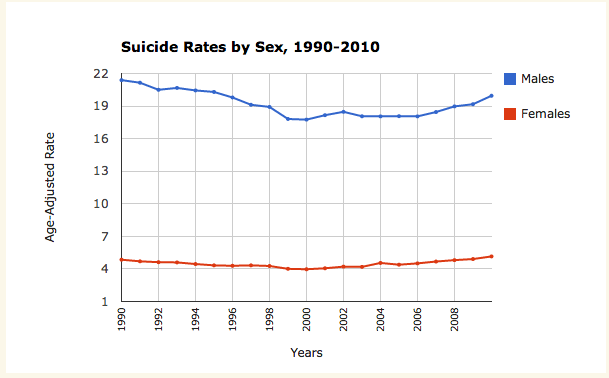 What are the most recent numbers for farmer suicide?  Amazingly enough, it's hard to find out.  I use "The Straight Dope" as a kind of "Snopes" for these questions. Here's what they found out.

Well, it hasn't been easy to track this one, and I'm not sure I've got a definitive answer. Let's start by noting that suicide statistics are questionable at best. Many suicides are classified as "accident" to spare the family from publicity. So the statistics are only a rough indication.I easily found statistics on the Internet about suicides by age, region, gender, and race, but very little about occupation. Actually, since suicide is the second leading cause of death in the U.S. among those age 15 to 24, probably the answer is "student", but I don' t think that's what you're looking for.I called the library of the Society of Actuaries, thinking they'd know. The librarian said she used to work at a large psychiatric library, and that about 8 years ago, the answer was psychiatrists/psychologists/related. However, she couldnt quote me a source or cite a statistic, except what she says she knew. [More]

In fact, I spent an amazing amount of time trying to nail this statistical jello to the wall. And largely failed.  All the articles I found were slanted to assess blame, attack GMO's or Big Ag or pesticides, raise sympathy for (usually) smaller farmers, or persuade readers to support some cause.

Every now and then you would find a real number (I think) like this:

So that would mean about 10 farmers per year in CO alone. But without historical or comparative numbers it doesn't tell us much. And it sure doesn't jibe with the national numbers from NIOSH above.

I'm not going to waste any more time on this since it looks somewhat futile, despite the tragedy it represents. My conclusions:

So when you read, as I did in Kevin Van Trump's daily newsletter, an account like this, note your reaction and don't leap to conclusions.


West Central Iowa - Two weeks ago my best friend and neighbor committed suicide. The whole community is in shock because this was one of the calmest, nicest guys I knew. He was a good farmer who had cattle and row crops. He worked harder than anybody I know. I talked to him almost every day. This past winter with all the snow and bitter cold for so long while having a lot of cattle, I think it just got to be too much. He knew it was going to be a late spring, had a ton of manure to get hauled because he didn't get much done during the winter, plus all the crops - just took a toll on him. So we all need to learn from this. If you feel stressed out, you either need to get more help or let some livestock or rented land go back. Also we need to watch out for each other. As I look back I could tell he was depressed but not in a million years I thought he would do something like this. There has been many times where I have thought instead of me owning the farm, that the Farm owns ME. Money isn't an issue, just too much work to get done, especially if you farm alone. Farming has changed so much since I started. Seems like the seasons were longer or something. People were more laid back. A lot more rush rush now. Anxiety can sure set in this time of year with looking ahead and so much to do.

Each event is a tragedy of its own, and thankfully, suicide is still rare enough to shock us each time. I don't think the link between suicide and farming is precisely enumerated nor well explained, just frequently spun.

[A good (albeit troubling) thread on the aftermath of suicide is here.]
Posted by John Phipps at 7:09 AM


I found your blog when I was looking for a different sort of information but I was very happy and glad to read through your blog. The information available here is great
Dallas