OK - we've done that. Newspapers (remember them?) have touched an ominous milestone. 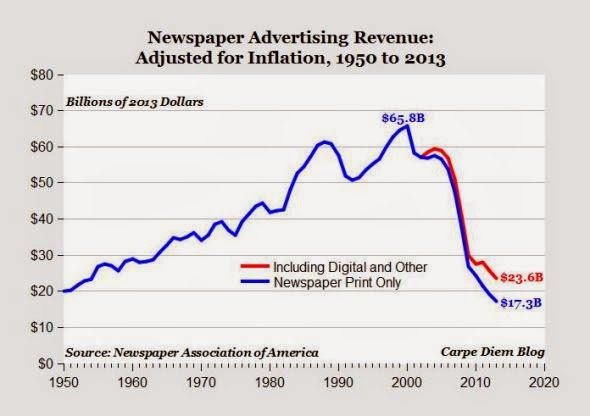 The decline in print newspaper advertising to a 63-year low is pretty amazing by itself, but the sharp decline in recent years is stunning. Newspaper print advertising revenues decreased more than50% in just the last five years, from $37.6 billion in 2008 to only $17.3 billion last year; and by almost 70% over the last decade, from $56.9 billion in 2003.Here’s another perspective: It took a half century for annual newspaper print ad revenue to gradually increase from $20 billion in 1950 (adjusted for inflation in 2013 dollars) to $65.8 billion in 2000, and then it took only 12 years to go from $65.8 billion in ad revenues back to less than $20 billion in 2012, before falling further to $17.3 billion last year.Even when revenues from digital advertising and other categories described by the NAA as “niche publications, direct marketing and non-daily publication advertising” are added to print ad revenue (see red line in chart), the combined total revenues for print, digital and other advertising last year was still only $23.56 billion in 2013 dollars, which was the lowest amount of annual ad revenue since 1954, when $23.3 billion was spent on print advertising alone.The introduction of digital advertising starting in 2003, and the introduction of “niche publications, direct marketing and non-daily publication advertising” in 2011, have helped to slightly increase total ad revenues (print + digital + other), and the red line in the chart shows the contribution of those other revenue sources. But those sources are relatively small in comparison to print advertising revenues, and haven’t stopped the continuing, overall decline in total ad revenues. For example, digital advertising increased only 1.5% last year, the niche/non-daily category fell by almost 6% and direct marketing increased only 2.4%. Print advertising fell last year by 8.6%, and overall total advertising revenue fell by 6.5%. Those new revenues sources are certainly helping to stop the revenue decline from being even steeper, but won’t likely ever be high enough to reverse the precipitous overall decline in ad revenues in the coming years. [More]

I real the Chicago Trib online, which works great for us ruburban subscribers. But I would never consider an actual newspaper subscription. I'm with Mark - the speed of this transition was stunning.

There are some unsettling implications for reportage. Local coverage seems to be in big trouble.

The gradual erosion of local news can be glimpsed in a new report from the Pew Research Center’s Project on Journalism. The Washington-based organization says in its annual “State of the Media” report that digital news continues to grow, but that the strongest gains have been among sites with a national focus, not those covering city hall or the local high school team.The report found that just 30 national and international news sites — Vice, Huffington Post, Politico, Buzzfeed, Mashable, among others — accounted for about 60 percent of all the new digital journalism jobs created over the past five or so years. [More]

Going further into the gloom, can local TV coverage be far behind?

Among the findings:• 2011's ratings gains for network news evaporated in 2012. An average of 22.1 million people watched one of the three evening newscasts on ABC, CBS or NBC, a 1.9 percent drop from the year before. "CBS Evening News" was the one broadcast to increase viewership but it was still in third place.• Viewership of morning news shows dropped 4 percent during the same period. NBC's "Today Show" ceded the top spot to ABC's "Good Morning America."• The signs were even more grim for local TV news, which lost audience in every key time slot - morning, early evening and late. The average loss was more than 6 percent.• Cable news didn't fare much better. Total median viewership rose only 1 percent across the three main news channels in 2012, even though it was a presidential election year. CNN was hardest-hit, shedding 4 percent of its prime-time audience. Fox News still led the pack in prime time but even it was flat, while no. 2 MSNBC was up 6 percent.• In print journalism, total daily newspaper circulation, buoyed by paywalls, stayed even in 2012 with 2011. But four of the five black newspapers studied lost circulation. And in an a year when Newsweek published its final print edition, the major news magazines saw drops in readership, on average 16 percent.The loss of audience seems to go hand-in-hand with a decline in the quality of news coverage. On local TV news, government coverage has been cut in half since with 2005, while sports, weather and traffic account for 40 percent of the content, the study found.(As I've written before, local TV news, by and large, consists of a steady diet of crime, helicopter shots of building fires, hysterical weather forecasts and cheerleading sports coverage.) [More]

We're reaching the point where commenters like me are getting a little nervous about incoming blog fodder. If we're all waiting for some other institution to do the grunt work of gathering news (and sniffing out corruption, etc.) won't we just be batting the same paltry fact inventory around?

For all the scorn heaped on the mainstream media, what exactly would even the critics work with when it dries up?