I was puzzled by the fact that farmer ownership of land is actually dropping after hearing for years about how they were the major buyers in the market.


The 2012 Iowa Farmland Ownership Survey from Iowa State University Extension shows 62 percent of Iowa farmland was owned by non-farmers last year, up from 60 percent in 2007 and 55 percent in 2002.The survey, compiled every five years by ISU Extension, is mandated by the Iowa Legislature.While the high percentage of farmland ownership by non-farmers might appear to be unusual, the cost of land, equipment, seed, fertilizer, crop insurance and other expenses related to planting and harvesting a crop is a major contributing factor.“With the amount of capital required today for a farming operation, we need the partnership with the landowners to bring that capital to the table,” said Kirk Weih, vice president of Hertz Farm Management in Mount Vernon.“About 40 percent of Iowa farmland is cash-rented, where the landowner gives up control of the farm, but receives rent by the acre. The farm operator makes all the decisions regarding what will be planted and provides all the capital required for the crops.”Weih said Hertz Farm Management, which manages farmland for non-farmer owners, also sees about 40 percent that is custom-operated. In that case, the landowner hires a neighboring farmer to do the planting and harvesting, but the landowner makes the capital investment for everything from seed to tiling.“There’s also a crop-share arrangement where the farm operator receives 20 percent to 25 percent of the crop for his contribution of labor and equipment,” Weih said. “The landowner receives 75 percent to 80 percent of the crop for their contribution of the land and all the expenses to plant and protect the crop.”[More]

How could farmers be the major buyers of farm land and end up owning a lower share?

Well, duh, John  - they die, and non-farming children inherit. I had forgotten we aren't immortal. Also farmers become non-farmers, as I am gradually doing.

There is no good way to truly capture how much land is closely held by non-farming family members. We count that as "famer-owned*" - a sort of virtual farmer ownership.

Meanwhile, we're back to great alarms about outside investors jumping in to buy up farmland.

The report notes that over the next 20 years, nearly half of US farmland—about 400 million acres—will be up for sale as our aging base of farmers moves into retirement. So far, Wall Street cash is moving onto US farms like a stream; financial firms own just about 1 percent of total acreage, and most farmland is still bought by farmers, not institutional investors, the report states. But as more prime land enters the market, the hot money could soon flow like a gusher. By mid-2013, farmland was such a hot commodity that institutional investors werecomplaining of a tight market for prime farmland—that is, they had more money committed to buying farmland than they could find attractive deals for. But the supply of prime farmland for sale will expand as farmers retire in the coming decades, and Wall Street looks poised to move into the market.And of course, you don't have to take on the risk of farming when you buy farmland; you can also collect rent checks from the people who take on that risk. According to this USDA report, nearly 40 percent of US farmland acres are rented, and in the ag-heavy regions of farm states such as Iowa, Illinois, and California, the number tops 50 percent. The Oakland Institute report points out that one of the biggest players eyeing US farms is UBS Agrinvest, an arm of the Swiss banking mammoth UBS. UBS's strategy: "Rather than gambling its profits on commodity prices that could rise or fall, Agrivest prefers the predictable income that comes from renting to tenants, usually through lease agreements that last one to five years." That strategy is looking pretty good right now, because corn and soy prices have fallen while land rents remain stubbornly high. Between 2010 and 2012, the value of UBS's US farmland portfolio jumped from $192 million to $415 million. [More]

Philpott is noted for his agrarian proselytizing, but that doesn't excuse the dude from doing some math.  The normal turnover for farmland is 3-4%, so "half in 20 years" noted above is strangely below normal. And just because it changes hands doesn't mean it goes up for sale. In fact, very little does - it's mostly inherited. 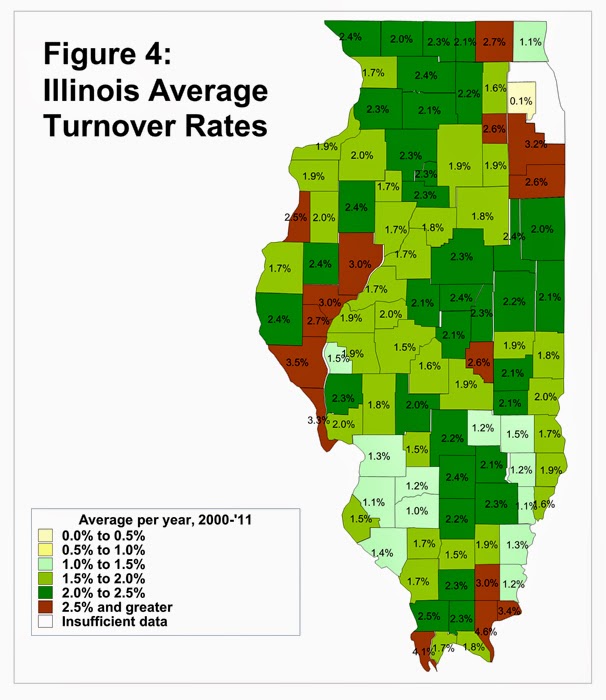 This is one of the most thorough efforts to measure the farmland market, and I expect it is still high. There are too many sales that happen before you know about it to be truly called open market transactions (buying out a long-time landlord, for example).

The bottom line is these Cassandra-ish warnings about outside investors are perennial sensationalist drivel. Besides, how can the over-predicted farmland crash happen if all this hot money is wating to pounce?
Posted by John Phipps at 9:08 AM

Email ThisBlogThis!Share to TwitterShare to FacebookShare to Pinterest
Labels: farmland

John should farmland not be owned by farmers and the guys farming it? At one time I thought that "outside ownership" would be good for us guys that need too rent some land but it turned out there main interest is ROI and could care less about who farms it. A 700acre+ chunk nearby sold at a premium too a UK investment firm. I would rather see some farmers owning it This land rental deal just won't end well for a lot of guys-regards-kevin

It does seem to come and go, doesn't it? Back in the 80's bringing in outside money was THE answer. But I always saw it as a short-term fix with long term security problems. I think I've been vindicated as sweetheart deals seldom last long, and cash rent competition makes those very expensive acres.

I want to own every acre possible of my farm. But thats a loooong commitment. All I know is during the downturns, it's a huge comfort to know those acres can't suddenly disappear.