A few weeks ago on USFR I talked about how our domestic sugar industry was vulnerable due the the fact it is a wholly political structure - absolutely dependent on subsidies/protectionism for its existence. Too many other places can grow cane sugar too cheaply. I tried not to attack or judge, just mention that as we inched toward freer trade, it was one of ag's most likely and biggest losers.

The sugar industry responded with predictable counterpoints on the show.


There are more rationalizations that have become gospel for the industry. But the fact that Big Sugar spends almost as much on lobbying as all other commodities combined should suggest they are a political construct - not a viable economic enterprise.

All that is beside the point, and was not my main issue. I was simply trying to say the tide of commerce seems to be flowing in the direction of freer trade - and sugar is vulnerable, despite whether the sugar program is good or not.

Actually, I edited out my main point: If other countries subsidize sugar, isn't the sane economic policy to let them pay for our consumption? If people are paying part of the tab, why should you spend more - in our case much more? 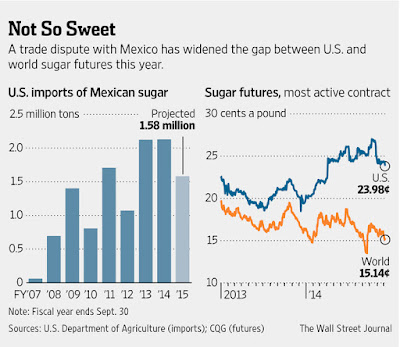 The stakes has risen. I'm not the main problem by far for Big Sugar. Look who's making the sugar program a 2016 campaign issue:

Joint SCOOP with Tom Hamburger: The Corn Refiners Association, representing companies that produce high-fructose corn syrup, has just hired 10 outside lobbyists as part of an unorthodox attack on sugar producers and the unusually generous federal support that they receive. Their first target is an agriculture appropriations bill now working its way through a House committee. “While every other farm support program has received multiple rounds of reforms, big sugar has not been touched,” said John Bode, CEO of the Corn Refiners group.Watch for sugar supports to become the next Big Thing that movement conservatives oppose, even if they supported them in the past: Some on the right predict this issue will play out a lot like the reauthorization of the Export-Import Bank. The bank’s charter is likely to lapse, at least temporarily, next week after a sustained push by conservatives to cast it as a symbol of corporate welfare. The 2016 presidential contenders continue to seek out issues where they can get to the right of one another.“Defeating the sugar lobby is the next campaign after Ex-Im,” Grover Norquist, from Americans for Tax Reform, told The Daily 202 last night. “Both are cronyism in its undiluted, inexcusable majesty. Both have survived because they perfected the skills to control Congress for their own profit. If they go down, no political subsidy will be safe. The implication of these wins is bigger than the ban on earmarks.”The Club for Growth’s Andrew Roth added that fighting the sugar subsidy “is high on the list” of priorities after Ex-Im: “If there is more muscle going into anti-sugar subsidy efforts, we welcome it.”Heritage Action’s Dan Holler argues that the war on sugar is “a whole lot further along” than the push to kill Ex-Im was just a few years ago. Indeed, a 2013 amendment to reduce sugar price supports and enact other reform failed by just 15 House votes. “Using the protectionism that exists around sugar to highlight the dreadful nature of America’s farm policy is very important to us,” he said. (The sugar lobby declined to comment.)The coming sugar war could become problematic for Marco Rubio and Jeb Bush, Republican presidential candidates from Florida who have been supportive of sugar but already have at least one big strike against them in the eyes of activists (immigration). [More ].

As we all know, if your party name starts with R, you don't cross Norquist. Or the Koch's. Or FNN. Or...never mind. To put it mildly, outside of sugar-producing state legislators, these is not a lot of love for our policy in the political spectrum, and it's become A Cause for the right.

Subsidies for sugar producers raise prices for consumers and cost taxpayers billions of dollars per year, but now a bipartisan effort is underway in the Senate to repeal them.
The New Orleans Times-Picayune reported on Tuesday that, “seventeen U.S. senators have introduced legislation to repeal the U.S. sugar price support system, renewing a fight that was won previously by sugar producers.”
Although some believe that Republican majorities in Congress might be more receptive to repealing the subsidies, the Times-Picayune predicts that, “the sugar industry is still likely to prevail.” (RELATED: Sugar Lobby Sweetens Deal for House Republicans Protecting Subsidy)
Nonetheless, Democratic Sen. Jeanne Shaheen, along with Republican Sens. Mark Kirk and Pat Toomey, reintroduced the Sugar Reform Act last week, quickly attracting an additional nine Republican and five Democratic co-sponsors. [More - I'm not proud of excerpting the Daily Caller, but it's to make a point about the far right position]

But this has become an internecine battle as Big Corn takes off the gloves. HFCS is certainly struggling, and sugar policy has always driven them nuts. While there has been a running battle over competing health claims, it's sales of HFCS that is driving this war. 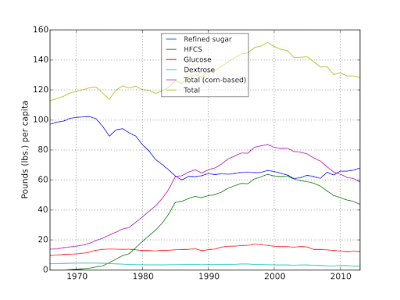 The HFCS-free trend has been noticeable, but the results are not showing up in use figures significantly so far. While declining in the last few years, it has simply followed the total sweetener use curve.

Note the top line above. With sweetener use in general declining, producers have one main option: increase market share, and while attacking the sugar program seems to be one way to do it, I'm not so sure.

Sugar can be grown darn cheap in tropical countries like Brazil, Caribbean nations, and Australia. Now add in the muscular dollar, and we could save billions by imposting our sugar. [Important note: while Big Sugar loudly proclaims the program doesn't cost the taxpayer, it does cost the consumer. Which makes it a very regressive policy - hitting low income people harder than rich]

My guess is that these factors will combine to put extraordinary pressure on the sugar industry:


So to sum up.  The US sugar program may be a good thing and crucial to good farmers who are allowed to grow beets (closed coops) or cane producers. It's not IMHO, but that is not the point. It's that macro trends are combining to erode the political base of an non-economic industry.

This will not be pretty.

I don't know how long you were mowing roadsides to think this thru but Spot On! Steve H.

Over the years I have come too the conclusion that Farmers believe welfare for Mom's is bad,Big oil is bad ,auto unions (or maybe all unions) are bad and Farmers want government out of there lives and business with the exception of bailing us out when weather or markets is bad , subsidizing crop insurance , bigger RFS mandate , dairy buy out, set aside acres, ect. regards-kevin