A few months ago, I spoke on USFR about income and wealth inequality.  I have been writing about it for a couple of years here, and researching the data on what lumped distribution may mean for our nation's future economy and society. 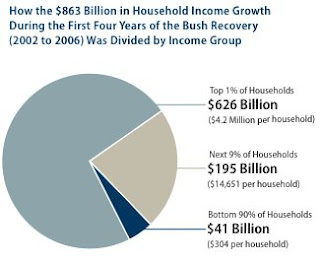 My main point was while most of us don't think income redistribution via progressive taxes is a cure-all, allowing income and wealth to pile up in a few hands seems historically to have really bad consequences. (Interestingly, one outcome that never seemed to come up was the wealthy would mishandle it badly - as looks like the case today.)

Inevitably, in such conversations name-calling can break out, and the epithet of the moment seems to be "socialist". One of my heroes had pertinent words on this topic and he is admired by a man who decries any hint of socialism.


Imagine that instead of telling Joe "the Plumber" Wurzelbacher that "when you spread the wealth around it's good for everybody," Barack Obama had said the following:


We grudge no man a fortune in civil life if it is honorably obtained and well used. It is not even enough that it should have been gained without doing damage to the community. We should permit it to be gained only so long as the gaining represents benefit to the community. … The really big fortune, the swollen fortune, by the mere fact of its size, acquires qualities which differentiate it in kind as well as in degree from what is possessed by men of relatively small means. Therefore, I believe in a graduated income tax on big fortunes, and … a graduated inheritance tax on big fortunes, properly safeguarded against evasion, and increasing rapidly in amount with the size of the estate.

The New York Post's Page One would blare: "OBAMA: I'LL SEIZE 'SWOLLEN FORTUNES'!" Bill Kristol would demand to know, in his New York Times column, what godly powers enabled Obama to discern precisely whose wealth—David Geffen's? George Soros'?—would "benefit the community." On Fox News, Bill O'Reilly would start to say something, then sputter, turn purple, and keel over backward in a grand mal seizure.

John McCain, meanwhile, would have to stop saying that Teddy Roosevelt is his hero, because the passage quoted above is from T.R.'s "New Nationalism" speech of 1910. Either that, or McCain would have to quit calling Barack Obama a socialist. [More]

Further, since we all know how rich the rich are these days, the brain chemistry known as reference anxiety triggers widespread dissatisfaction despite increasing well-being all up and down the spectrum. For a nation which interweaves the ideas of individual equality throughout our political values system, the apparent dichotomy becomes a real bone of contention.

During my commentary I pointed out we are already engaged in various forms of wealth redistribution: progressive income taxes, Medicaid, food stamps, farm program, etc.  In fact, all modern democracies sort themselves along a range between capitalism and socialism according to their cultural preferences.  It is not black and white.

My European friends are much more socialistic and they don't seem miserable.  In fact, the highly socialized economies of Scandinavia consistently report the highest level of happiness.

The reaction from many on the right was sharp.  Several long rants (and I think that is fair characterization) about the heresy of socialism, and the slippery slope to godless communism soon arrived in my inbox. Some even worked in gun control and abortion somehow.

But none offered any answer for the the bi-polar income distribution and its possible effects.  And amazingly, most despised the bailout plan as helping the rich, whom in the previous sentence they jut stood up for vehemently.

Well, they may want to rethink. The old s-word has popped up again and it was initiated not by liberal loonies, but by rock-solid Republicans on Wall Street.  In a matter of a few weeks, the most right-wing administration in recent history has nationalized banks, insurance companies, money market funds, and who knows what's next.

One possible conclusion that is dawning on many Americans is socialism is all right for capitalists who screw up, but heresy for autoworkers who lost their jobs. The idea of taking my hard earned wealth and giving it to slackers is anathema.  The hard right only supports giving it to bumbling members of their own upper caste.

Regardless of the beneficiaries, we are all going to lose significant wealth - or at least have a harder time accumulating it. This will occur whether by outright redistribution mechanisms or unavoidable inflation.  Besides, if all the wealth is held by a few, who ya gonna rob?

While I agree that spitting in contempt does not advance serious discussion of the economic crisis, clearly the trend for the country as a whole is for it to occur far more at the sound of the c-word than the s-word. Maybe you are just trying to catch up your audience to the major political/economic wave sweeping the rest of the country.

As far as right wing goes, I don't know, but this is the most big government, albeit inept government, administration since at least Nixon or LBJ. And the major bank deregulatory legislation took place under Clinton.

But to your main point, it may be hard to see right now, but no policy or program will do as much to flatten the income pyramid as the current economic realignment is doing now. Since it has become clear that most of the accumulation in US income in this decade was a mirage, the disappearance of said wealth will come out of the same income percentiles it went into. Further, if you were a rich idiot who owned MBS, you lost it all, while the poor sucker with the original mortgage has reworked his loan down to the current, vastly cheaper price of his home(See Indy Mac in California for many many examples.)

Just think about how many of those top 1% of earners were in the hedge fund/ib/financial services industry. Well, no soup for you! Those big salaries and bonuses won't be back for a long time.

To close with a little sarcasm, yes you are right that we will all lose significant wealth, but won't we be so happy to know that the rich lost a larger share.

I'm not convinced there is much reason to expect symmetrical subtraction to match the gains shown in the graph. There will be schadenfreude aplenty, to be sure, but their smaller economic cushion will hit the bottom cohorts of income much harder.

What is the evidence or logic behind your lack of conviction? And I'm glad you saw the point of my sarcasm. Brain chemistry only gets one so far.

I been ciphering on this since I read it,( boy does my brain hurt!!). I will proxy to you and Brian to hash over the details.
But I believe it comes down to salesmanship. Somebody somewhere is trying to sell you something you either want or can't afford.

Hey Mr. John.. I heard a comment on one of those Stock Market shows as I was heading out the door. Need your and others input.
this is not a direct quote now.. the commodity markets could self-police themselves and do better if they were not trading on the price of items a year or more into the future. But rather set the limit to a couple of months and that would cut down on speculation.
Papaw always said if you don't know ask somebody that does, to me that's you. Whadda ya think???