I have been leaning toward a scenario of increasing inflation, and as a result bear many scars and bruises from the current deflationary spiral. It would be human to stubbornly cling to me now-obvious mistake, but I still think we will experience a period of serious inflation.  Here's why.

To downward plunge in housing prices must stop to permit any credit to flow and march to prosperity resume. To arrest that dive, world banks are creating and infusing money into all forms of financial institutions - and the biggest and boldest move of all may be about to happen.


Published reports indicated that the government is planning a bold move to loosen credit markets. The Federal Reserve and Treasury Department are said to be considering buying commercial paper, short-term financing that companies use to fund day-to-day operations, from individual companies.

This would, in essence, put the Fed in a position of funding companies in order to keep the economy running. In the current credit crisis, companies are having a difficult time getting funds to operate. [More]

The minute enough investors sense a bottom or even a slowing of deflating asset values, all those dollars will be chasing stuff to buy.  That is classic inflation - too many dollars seeking too few goods and services.

Moreover, a little inflation could quietly devalue the monstrous debt we have added primarily by the bailout(s), but also with the war and fiscal foolishness. It is clear the Federal Reserve and other central banks has put inflation fears on the back burner - something to worry about after the economy is moving forward.  I agree with this priority, but the overshoot in money supply will be significant, I believe.

For the meantime, the deflation hawks are in charge. And they make a powerful argument for why the dollar may not drop sharply - a principal feature of inflation.


My inclination is to think the dollar will hold its value.  I don't trust any of the macro models of currency values and we do know that purchasing power parity, while very approximate, and exerting its force only in the long run, does not imply a bearish stance toward the dollar.

Here is a list of European banks with assets greater than the gdp of their respective home countries.  And read this.

As for this country, the Chinese now regard us as "battle tested."  We have been through some truly major bumps, yet no major U.S. politician has called for "not paying back the Chinese."  We've even guaranteed the $350 billion in agency securities held by the Chinese central bank and without a stir.  I think the Chinese are shocked by that and in many ways they now trust their investments more than before, not less.

The Chinese do not have comparable trust in "Europe."  If something went wrong in the financial realm, who would they call up on the phone?  Which country?  What do they think is the power base of the head of the ECB?  What political party does that person belong to?  What favors can be traded and with whom?  Whose answer would count as definitive?  Keep in mind that for all of China's modernity, their leaders are still communist party functionaries.

Bush, Bernanke, Paulson -- we call them leaders.  The Chinese think of them as the customer service department.  I suspect the Chinese get straighter answers from them than we ever do. [More]

But if all currencies are inflating, this argument becomes less potent, and our currency can still devalue with inflation.  This is what I expect in just a few months.

Meanwhile, those few months will not be much fun for ag producers.  If land values hold up, we'll be fine, and so far it seems to be a relatively immune asset.

If this seems a little Pollyannish, check out this graph of the loooong term outlook. 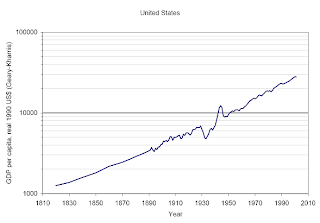 [More]
Take a breath, talk to friends, remember how you got here.  It will help.
Posted by John Phipps at 7:02 AM

Reminds me of Arthur Clarke's quote to the effect that all advanced technology looks like magic to primitive people. (Too lazy to get the exact words, which were way better.) So over a sufficiently long view, all graphs of economic development look like an almost straight line.