While waiting for the much-anticipated January reports on crop sizes and stocks, I was cruising around other strange ag econ output and found this:


The prices paid for corn by grain‐based ethanol production plants and other users of grain varies across the Midwestern United States. This article shows the overall patterns and trends in weekly corn prices in the major states producing grain ethanol since early October of 2006. Discussion will focus on the trends in prices for each state relative to the average weekly corn prices across the Midwest, including the states of Indiana, Illinois, Iowa, Minnesota, South Dakota, Nebraska and Kansas. If corn input prices are changing relative to the Midwest average, it may indicate either increasing or decreasing competition in their state corn markets over time. [More (pdf)]

This curious study is interesting on several levels. First and foremost is what (if anything) can be concluded from this statistical comparison.  Observe the (to me) unexpected regional differences. 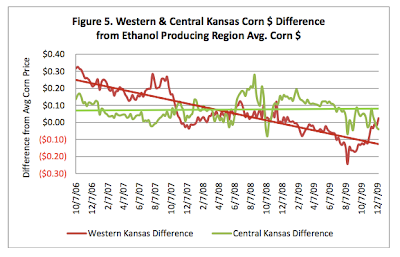 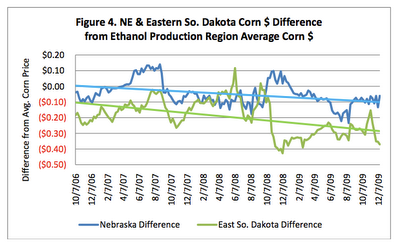 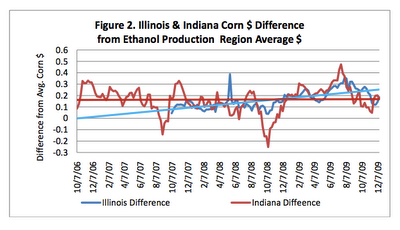 I'd appreciate other input here, but it appears to me that the oft-stated goal of plunking ethanol plants in the Western Corn Belt mostly strengthened prices for areas that constructed fewer - like Illinois.

The authors add - wisely, I think - a pretty strong caveat to the result.


This preliminary analysis indicates that some states that have been heavily involved in grain‐ based ethanol production have seen a relative increase in their cash corn prices in comparison to other states in the U.S.. For instance, relative corn cash prices in Illinois and eastern Iowa have increased in comparison to corn prices across the broader ethanol production region. Conversely, relative corn prices in western Kansas, South Dakota, and arguably Nebraska have declined in comparison to the overall average. Most notable is the drop in the relative prices for corn in western Kansas from fall 2006 to the present.
In the future, more comprehensive analysis of this issue needs to be completed, adding in cash market prices for ethanol, dried and wet distillers grains, soybean meal as well as futures market prices for ethanol, and RBOB gasoline.


Their conclusion above (my emphasis) is pretty shaky IMHO given the use of the word "some", as displayed in this final map: 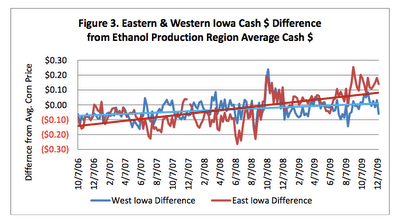 Western Iowa become synonymous with ethanol construction. At least it seemed on track to reap basis and demand benefits on par with eastern IA. While all corn prices have risen as ethanol demand gobbles 5B bushels of output, do these charts suggest that the price increases were not necessarily linked to the investment in the plants themselves?  Is there any trend at all regionally? If so does it mean anything?

In other words, is it possible the coops in SD and IA just added to my ECB price advantage, while we largely passed on building our own plants?

Again, I'm not sure that is the conclusion here, but if not, what the heck is their point?

But back to the reports this morning. Once again, market observers are picking their jaws off the dirt and zeroing in on another adjustment possibility from NASS and USDA.


Record large corn and soybean crops this morning came with a big asterisk: USDA said it will re-survey producers in states where the corn harvest was not finished when the December report was conducted, and also in some states in the South where soybean harvest was delayed.


The corn states subject to a recount are Illinois, Michigan, Minnesota, North and South Dakota and Wisconsin. [More]

I'm going to wait and see how corn trades today and over the next few days.  I'm frankly looking for signs of low confidence in government reports and/or fundamentals being overwhelmed by other factors.  Of course, this is the data selection bias, but we were heavily sold going into this report, and I have a hard time even suspecting I might have been right.

But both these reports suggest to me a hardened ag audience that greets academic and government output to new levels of scrutiny and criticism. This is healthy, and I think the best way to raise the performance of those agencies whose public mandate is to provide industry data.

I think the western belt ethanol plants stole the corn from the southern plains cattle feeders, who now buy our Illinois corn in 100 car unit trains.

I remember when the basis improved out west compared to ours a couple of years ago. Western Iowa was finally on the map.

Look at the livestock industry, and one thing not picked up by "posted" bids at Ethanol plants is the volume and quick delivery bids, or as I like to say you need 60,000 bushel in the next three days and we can get it to you, by the way what is that worth to you.

Government's report, who believes them, and I use to work for USDA, boy do I have some stories, eventually it will be found out, but in the meantime they will push for lower grain prices so they can keep the big integrated livestock operations in business.