Maybe the rhuburbs are over...

Even though the flood of 1031 money seems to have abated with the recession, enough pure investment dough has poured in to make up the difference, if not add to, the non-farmer demand for ownership of land.


Early in the decade, so-called 1031 land swaps — named after the section of the IRS code allowing land exchanges to avoid capital gains taxes — fueled the land market in many areas, even though commodity prices didn't justify them.

“I was more concerned about land prices tumbling then than now,” Schnitkey says. “As the urban market for neighboring farmland dried up 1031 exchanges, we could have seen the market decline markedly.” [More]


But oddly, even while observers saw alarming losses of farmland to housing encroachment, it would appear the outmigration of urbanites was already reversing.

A new study by the Brookings Institute offers an analysis farmers need to ponder.


D. Migration to exurban and newer suburban counties dropped substantially, while it brought about unexpected “windfall” gains in many large urban cores.


Within metropolitan areas, suburban and exurban areas often benefited most from the mid-decade housing boom. There, new housing construction flourished as easy credit became available, especially in the Sun Belt where new jobs were plentiful. Yet the most recent migration data show that these same outer portions of metropolitan areas took the greatest hits as overall migration dried up.
Based on a system that classifies large metropolitan counties by the relative urbanization of their populations, throughout the entire 2000–2008 period, emerging suburban and exurban counties expe- rienced greater domestic in-migration than typically closer-in, mature suburban counties (Figure 8).11 Core and high-density counties actually lost domestic migrants on net each year.
But the disparity between the urban and suburban counties reached its peak in 2005–2006, and narrowed greatly in the following two years. Growth from in-migration declined significantly in both emerging suburban/exurban and closer-in mature suburban counties. Meanwhile, the rate of domes- tic out-migration from core and high-density counties more than halved, as these areas apparently retained more residents who might have previously decamped for fast-growing suburbs.
These broad patterns, aggregated from all large metropolitan areas, play out more distinctly in par- ticular areas (Figure 9). Among large urban areas, the cities of New York and Boston, and Cook County, IL (which contains Chicago), all showed marked reductions in net out-migration after 2004–2005. Philadelphia’s net migration decline eased over the course of the decade. Outflow from Los Angeles County (which contains the city of Los Angeles) moderately significantly as well, though more recently. And San Francisco actually shifted from net out-migration throughout the decade to net in-migration in 2007–2008.
In contrast, fall-offs in domestic migration are evident in peripheral suburban counties within the metropolitan areas of Chicago, Philadelphia, Washington, D.C., Dallas, and Houston, among others. New York’s suburban counties counter this pattern as they tend to show either reduced migration losses or increased gains in 2007-2008. At the other extreme is Atlanta—an area that displayed metropolitan- wide migration declines in 2007–2008. There, 21 of 26 metropolitan counties showed reduced migra- tion gains over the period.
Overall, these patterns reflect broader trends occurring within major metropolitan areas nationwide, wherein cities and core counties are either losing fewer or gaining more migrants than at mid-decade, when the hot housing market seemed to accelerate a rush to the suburbs and exurbs. Some of these shifts involved new migrants from outside the metro area landing in the exurbs and suburbs. However, the bulk of the movement to newer outer suburbs and exurbs represented local movers, from inner parts of the same metropolitan area, radiating outward. [More]


The graph they included is note worthy for when the peak occurred - not after the collapse of the stock market, but closer to the time of increased transportation (fuel) costs. It could also be the distance/value ratios reached their tipping point, and houses could not be priced low enough to compensate for commuting costs. 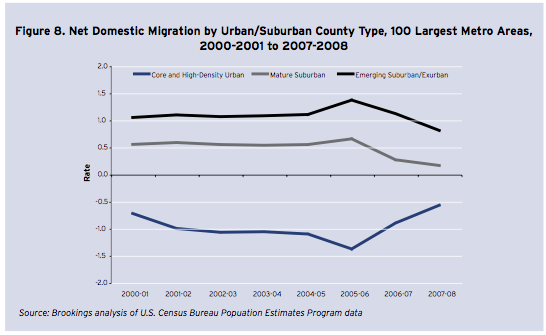 [The black line is most pertinent to farmland]

To be sure, outmigration still is occurring, but at a decreasing rate, lowering the pressure on farmland conversion. My guess is, at least for the next decade or two, the flamboyant "swap ratios" for farmers in the paths of development will become much tamer, perhaps even rare, as enormous inventories of land still need to be utilized.

Yet to be measured well is how the singular durability of farmland prices encourages outside investment for asset value protection in wealthy portfolios.
Posted by John Phipps at 10:20 AM