Maybe I can fall victim the the resource curse after all*.  My farm lies (if you squint) right at the edge of a shale gas play.

If you haven't heard the buzz in the energy world, it's all-shale-gas-all-the-time.


Natural gas is up now — way up — and it's changing how we think about energy throughout the world. If its boosters are to be believed, gas will change geopolitics, trimming the power of states in the troubled Middle East by reducing the demand for their oil; save the lives of thousands of people who would otherwise die from mining coal or breathing its filthy residue; and make it a little easier to handle the challenges of climate change — all thanks to vast new onshore deposits of what is called shale gas. Using new drilling methods pioneered by a Texas wildcatter, companies have been able to tap enormous quantities of gas from shale, leading to rock-bottom prices for natural gas even as oil soars. In a single year, the usually sober U.S. Energy Information Administration more than doubled its estimates of recoverable domestic shale-gas resources to 827 trillion cu. ft. (23 trillion cu m), more than 34 times the amount of gas the U.S. uses in a year. Together with supplies from conventional gas sources, the U.S. may now have enough gas to last a century at current consumption rates. (By comparison, the U.S. has less than nine years of oil reserves.) [More]

This could be a game changer. According to energy experts there could be extractable shale gas under me. 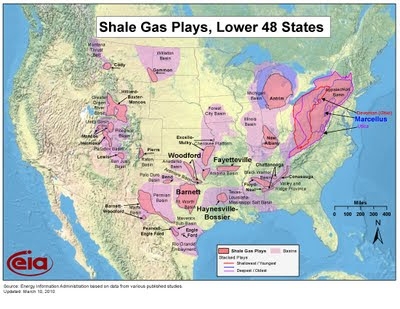 
Shale gas is not easy to uncork, and the process (fracking) stirs considerable controversy. Oddly this controversy seems to usually divide people almost exactly along the same lines as the shale gas deposits. There is nothing like unexpected windfalls - in this case - literally buried treasure - for stirring up strong emotions. (Ask anyone who has settled an estate)


But natural gas is better than coal for electricity and also fuels peaker plants that can make wind energy less unreasonable. My hunch is there is enough to frustrate energy conservation fans for several decades. But it could help shift us to hybrids and plug-ins if electricity suddenly becomes a comparative bargain and the technologies involved keep advancing.

We have two energy problems in the medium to long term, climate change and peak oil. (In the very long term, all bets are off.) Consequently, shale gas has been proposed as a temporary (a few decades) solution to both. We can—


As the economics get better, coal is ripe for replacement. Big Coal won't take this lying down, so it will be curious to see how they play it. They mantra so far has been, "OK, coal is little dirty, but there is lots of it and it's here". Given a cleaner domestic choice, I think officials could use shale gas as an end run around no-win climate change arguments and energy costs. The effect on transportation fuels could be significant as well, since fewer oil-fired plants in the East and more electric vehicles could sharply decrease demand.

Wonder how ethanol would pencil out with $7 corn and declining gas prices?


*Maybe not - we don't have big enough water supplies.
Posted by John Phipps at 6:40 AM

I don't know about shale gas. The ground water issue needs to be answered first before we jump into this with both feet.

We've already jumped...and we're working on coal-to-gas technology. Here in Wyoming, we're also figuring out how to 'feed' the critters that convert coal to methane (to revitalize the coal bed methane wells). I suspect we will switch to a natural gas energy economy sooner than most suspect. The other question is what transport and electrical demand for natural gas will do to the fertilizer market for natural gas...