Many of US ag complaints about exchange rates are, in fact, solving themselves via the old economics school theories of foreign trade. Our comparatively (and absolutely) low interest rates and trade imbalance has put pressure on the Chinese currency especially and I think with implicit cooperation of Chinese central bankers, the yuan has drifted significantly higher.

But while we are watching that, another story unfolds south of us. 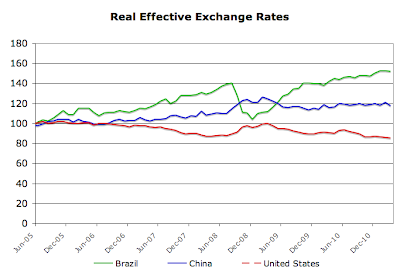 What's happening in Brazil? A big story is the country's high interest rates. These have landed the country in an extremelydifficult position. Inflation is high and rising, and so the central bank has responded by raising rates. But higher rates attract inflows of capital, which both bid up the value of the currency and support inflation. Because Brazilian rates are high, companies often opt to borrow abroad and repatriate the cash, essentially engaging in carry trade investments like big international investors and pushing up the value of the real.Meanwhile, Brazil's leaders find themselves facing an uncomfortable choice vis-a-vis cheap Chinese manufacturing imports. Cheap Chinese imports offer one source of disinflationary pressure in an overheating economy. But domestic producers are growing increasingly frustrated, and the government is concerned that appreciation is reducing competitiveness and undermining balanced growth. On the other side of the relationship, hunger for Chinese products continues to boost resource and labour demand in China, fueling inflation in the absence of a real Chinese appreciation. [More]

This complicates things for Brazilian farmers who have become quite the currency arbitrageurs. This from last year:

Soybean farmers in Brazil, the world’s second-largest grower, are withholding supplies of the oilseed as they bet the real’s drop will boost revenue from dollar-denominated sales abroad, the head of the nation’s biggest producer said.“It looks like the real will devalue a little bit more, so we are holding sales and waiting for the right moment to sell,” said Erai Scheffer, president of Grupo Bom Futuro, Brazil’s top soybean grower. The group has 230,000 hectares (568,000 acres) of soybeans, an area more than twice as big as San Antonio.The Brazilian real has lost 5.5 percent against the dollar this month, the worst performance of the seven most-traded Latin American currencies. Farmers don’t expect the real to rebound any time soon amid concern that the debt crisis in Europe may slow the global economic recovery, Scheffer said. [More]

Corn Belt growers are wallowing in an embarrassment of riches: record grain prices, record land prices, pitiful interest rates, and now, a currency tailwind.
If only we could get into the fields to plant a crop....
Posted by John Phipps at 6:00 PM