While you were trying to plant corn...

This forecast was quietly issued. 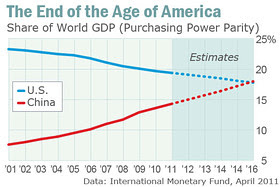 According to the latest IMF official forecasts, China’s economy will surpass that of America in real terms in 2016 — just five years from now.Put that in your calendar.It provides a painful context for the budget wrangling taking place in Washington right now. It raises enormous questions about what the international security system is going to look like in just a handful of years. And it casts a deepening cloud over both the U.S. dollar and the giant Treasury market, which have been propped up for decades by their privileged status as the liabilities of the world’s hegemonic power.According to the IMF forecast, which was quietly posted on the Fund’s website just two weeks ago, whoever is elected U.S. president next year — Obama? Mitt Romney? Donald Trump? — will be the last to preside over the world’s largest economy.Most people aren’t prepared for this. They aren’t even aware it’s that close. Listen to experts of various stripes, and they will tell you this moment is decades away. The most bearish will put the figure in the mid-2020s. [More]

For help with the idea of Purchasing Power Parity:

This is not the shocker it may seem, IMHO. Other than simple bragging rights, this crossing of trends was clearly indicated years ago.  The date is mildly startling, but my guess is many will simply dismiss the idea of PPP, and then resort to per capita GDP in turn to satisfy their search for a number that keeps the US on top.

Kind of like the curious "jobs that depend on agriculture" number that FB arbitrarily trumpets.

Moreover, we really don't know how this will affect our lives. My guess is not much, as our fortunes will be made or undone at home by our own policies.
Posted by John Phipps at 10:51 AM