Of Vladimir Horowitz. We didn't have pianists like this when my hormones were raging. 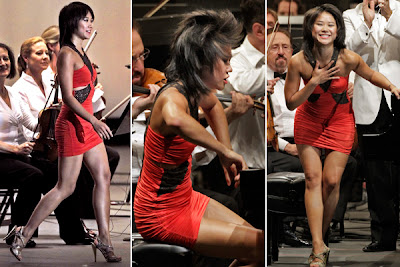 Pianist Yuja Wang struck a chord at the Hollywood Bowl this month and not just with her performance of Rachmaninoff's Third Piano Concerto. The 24-year-old Chinese soloist had necks craning, tongues wagging and flashbulbs popping when she walked on wearing an orange, thigh-grazing, body-hugging dress atop sparkly gold strappy stiletto sandals.

In particular, Wang's outfit was a hot topic at the concert and continued after Times music critic Mark Swed's review appeared in print and online. While Swed praised her delicacy, speed and grace at the piano, his fashion comments — including the observation: "Her dress Tuesday was so short and tight that had there been any less of it, the Bowl might have been forced to restrict admission to any music lover under 18 not accompanied by an adult" — have touched off a spirited debate among music critics and bloggers about what constitutes appropriate concert attire and conversely, whether a critique of a performer's clothes has any place in a music review. [ More uptightness in every sense of the word]

More interesting still to those of us on the far fringe of classical music is the legions of brilliant pianists emerging with technical skills that were the province of a select few only a few years ago.

Ms. Wang’s virtuosity is stunning. But is that so unusual these days? Not really. That a young pianist has come along who can seemingly play anything, and easily, is not the big deal it would have been a short time ago.

The overall level of technical proficiency in instrumental playing, especially on the piano, has increased steadily over time. Many piano teachers, critics and commentators have noted the phenomenon, which is not unlike what happens in sports. The four-minute mile seemed an impossibility until Roger Bannister made the breakthrough in 1954. Since then, runners have knocked nearly 17 seconds off Bannister’s time.
Something similar has long been occurring with pianists. And in the last decade or so the growth of technical proficiency has seemed exponential. Yes, Ms. Wang, who will make her New York recital debut at Carnegie Hall in October, can play anything. But in China alone, in recent years, there have been Lang Lang and Yundi Li.
Russia has given us Kirill Gerstein, born in 1979, the latest recipient of the distinguished Gilmore Artist Award, whose extraordinary recording of the Liszt Sonata, Schumann’s mercurial “Humoreske” and a fanciful piece by Oliver Knussen on Myrios Classics was one of the best recordings of 2010. In June Mr. Gerstein made his New York Philharmonic debut at a Summertime Classics concert with a boldly interpreted and brilliant account of Tchaikovsky’s First Piano Concerto. But don’t let his probing musicianship distract you. He is another of those younger technicians who have figured out everything about piano playing. [More]

This could be what I think of as the Tiger Woods Syndrome, where parents start much earlier with talented offspring and with the help of new methods of training produce prodigies in abundance.

But for a sector of the music industry not looking at a booming future, I think is was inevitable to see sex appeal woven into the product. It was already a big part of standard soprano uniforms. And if you look a the orchestras backing the admittedly treacly music of Andre Rieu. et. al., it is pretty obvious you need to be obviously pretty to apply.

Also, the live event is rising in importance to recorded music likely due to file-sharing and the decreased profits. So looking smoking hot works is not limited to the album cover CD case. I suppose the same things could be said for men (see also: El Divo) but I'll have to take Jan's word for that.

With increasing cosmetic surgery and other enhancement techniques, looking good is slipping onto the requirement list for more professions.

At some point, I wonder, will farmers have to be gorgeous to succeed? Screwier things have happened.

I'm getting out just in time.

Please for Christ sake help this poor boy from Haiti