It's not just crop reports...

That suck.  Even the BEA is having a hard time generating good macroeconomic stats.


There’s one big reason why the current economic weakness in the US has come as such a shock. It’s not the only reason, but it’s an important one, and it hasn’t gotten nearly the attention it deserves: the state of macroeconomic data-gathering in the US is pretty weak.
In particular, the data coming out of the Bureau of Economic Analysis at the beginning of 2009 was way off. Here’s Cardiff Garcia, introducing an interview with Fed economist Jeremy Nalewaik:


The initial GDP estimate for the fourth quarter of 2008 showed that the economy contracted by 3.8 per cent. It was released on January 30, 2009 — about three weeks before Obama’s first stimulus bill passed. That number was continually adjust down in later revisions, and in July of this year the BEA revised it all the way down to a contraction of 8.9 per cent.

The BEA is happy to try to explain what happened here — but whatever the explanation, the original 3.8% figure was a massive and extremely expensive fail. It was bad enough to be able to get a $700 billion stimulus plan through Congress, but if Congress and the Obama Administration had known the gruesome truth — that the economy was contracting at a rate of well over $1 trillion per year — then more could and would have been done, both at the time and over subsequent months and years. Larry Summers warned at the time that the risks of doing too little were much greater than the risks of doing too much; only now do we know just how right he was on that front. (And even he didn’t push for a stimulus of more than $700 billion.)
So what’s being done to beef up the state of America’s macroeconomic statistics so that this kind of monster error doesn’t happen again? The BEA is doing the best it can, but it’s constrained both in terms of its budget and in terms of the quality of economists it can attract. [More]

Of course, the widely touted failure of the stimulus is anything but. It stopped the freefall and until it ran out, sustained our emergence from recession even while states were massively cutting back. But had we but known the real magnitude of the plunge in the 2008 Q4, a larger and more effective stimulus would likely have helped even conservative economists to accept a larger stimulus.


Conservative economist Douglas Holtz-Eakin has a chart he's fond of that demonstrates just how ineffective the 2009 stimulus was. Basically, it shows that the stimulus cost $260 billion and produced only an extra $268 billion in GDP. Personally, I'd take even that, but his point is that the stimulus produced no Keynesian multiplier effect at all. It was just a 1:1 replacement of revenue from one source to another.
But as you may recall, the US Bureau of Economic Analysis recently revised its GDP estimates from late 2008 and 2009, and it turns out the economy was doing much worse than we thought. And if you don't recall this, Michael Linden wants to remind you about it today. He also wants to remind Douglas Holtz-Eakin about it. Because it turns out that when you redo Holtz-Eakin's favorite chart using the corrected data, it suggests that the stimulus bill produced about $544 billion in extra GDP. In other words, a multiplier effect of about 2x. [More] 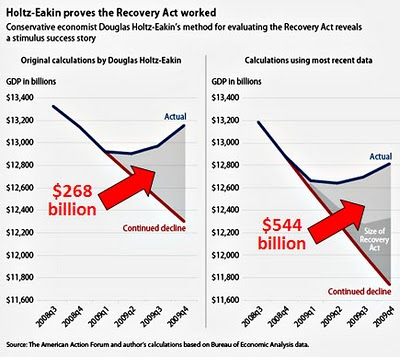 Bringing an economy from rapid deceleration to sluggish growth is an accomplishment, but anything less than a roaring boom strikes most of us as unsatisfactory. Unless we focus more on short term responses coupled with long term commitments, we will continue to muddle along in the the gray days of stagnation for far too long.

But it should be clear we really dodged a deadly bullet in 2009. Things could be much, much worse right now.
Posted by John Phipps at 6:36 AM

So how is your corn coming out John?