But you can't hide. I'm talking about hot money looking for safe place to live - theme that shows up constantly in my posts, I now realize.

I would guess I'm not surprised because I am ~130% invested in farm land, which not only has been safe for the last few decades, but lucrative. But if you are not a land nut, choices for safe investment are not ample. 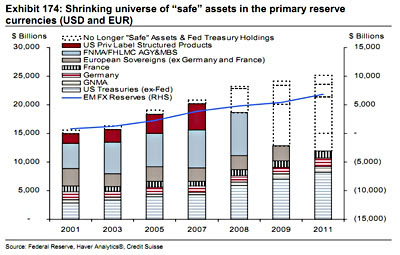 You’ll find the above on page 143 of the Credit Suisse 2012 Global Outlook, which we’ve stuck in the usual place.
It shows how the world’s outstanding stock of safe haven assets denominated in either dollars or euros has evolved, adjusted to account for the Fed’s purchases of US Treasuries and other assets in recent years as part of quantitative easing.
You can see just how impressive the decline has been since 2007, and we’d also note that if Credit Suisse had been feeling uncharitable, they would have been justified in excluding French sovereigns.
The chart helps explain much of what’s happening in global financial markets now, especially in Europe (not on its own, mind you — we said “helps” explain):
– Begin with the ongoing collateral crunch, and how the decline of safe assets is directly tied to the dramatic fall in the availability of high-quality collateral in European lending markets. So much of it is now encumbered via direct bilateral funding agreements or by sitting at the central bank drawing liquidity. [More]

While I kinda thought this was happening, the scale of the shrinkage was alarming.It also makes me wonder, what will have to happen to make stuff that was downgraded upgraded in the future? I suspect only significant time and good performance.