To have grandchildren earlier.  This wasn't the reason, but... 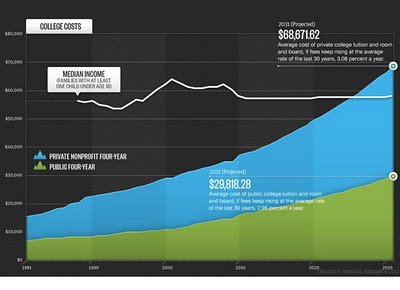 New moms and dads with visions of Ivy League degrees dancing in their heads should be prepared to face a bill of $422,320 in today’s dollars if Junior heads off to one the country’s priciest colleges as a member of the class of 2034.

If college costs keep rising as they have for the last three decades, the inflation-adjusted price of four years of tuition alone will more than double at private colleges and nearly triple at public universities by the time a baby born this year is ready to enroll, an analysis by The Daily shows.

I wonder how this would compare to my own education cost and calculated in acres of farmland. If I remember correctly, it was about $6000 total at RHIT (1966-1970).  I think land was selling for about $600, so it cost ten acres to educate me.

These are quick and dirty numbers - just thinking out loud.
Posted by John Phipps at 4:32 PM

Nice comparison at the end. Is the ratio of the going rate of two priceless things meaningful?