We could just collect what is owed right now.  Bruce Bartlett has the sad story. 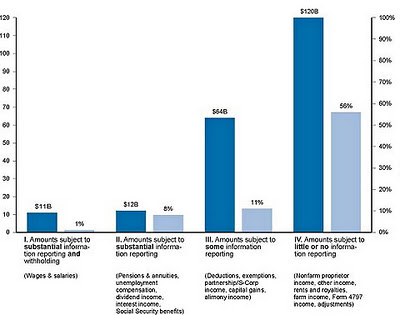 Clearly, therefore, one solution to the tax gap is to increase reporting and withholding requirements. However, previous efforts by Congress to do so have been met with huge political resistance. People don’t like the intrusion into their privacy — and the diminution of their opportunities for tax evasion — and businesses don’t like the cost or the alienation of their customers.
In 1982, Congress briefly enacted a withholding requirement for interest income and the outcry was so loud that it was repealed almost immediately.
Conservatives tend to talk about noncompliance as if it were solely a function of tax rates. The higher tax rates are, the greater the incentive for tax evasion; lower tax rates and evasion will decline. Thus tax evasion is yet another excuse to cut taxes.
However, as the I.R.S. data show, noncompliance increased between 2001 and 2006, a period in which a substantial number of tax cuts were enacted. The top rate fell to 35 percent from 39.6 percent, the bottom rate fell to 10 percent from 15 percent and the rate on dividends fell to just 15 percent from a top rate of 39.6 percent. If the conservative model is correct, tax compliance should have increased, since the return to evasion fell substantially.
Of course, another factor in tax compliance is enforcement. Someone who thinks the odds of being caught are close to zero is going to be strongly tempted to cheat no matter how low tax rates are.
Unfortunately, Republicans have been treating the I.R.S. like a political punching bag for years, cutting its personnel and restricting its ability to do its job. The number of I.R.S. employees fell to 84,711 in 2010 from 116,673 in 1992 despite an increase in the population of the United States of 53 million over that period.
Federal revenues are at a historically low level and are a key cause of the federal budget deficit. Sooner or later, taxes will have to be increased. It would be better to minimize that increase by ensuring that taxpayers pay what they owe. It’s unfair to honest taxpayers and undermines tax morale when large numbers of people and businesses don’t pay their taxes. [More]

With a smaller workforce, I suspect the IRS will be targeting the richest hunting ground. And that looks like my ground. Could it be that grain 1099's will finally happen?

The fate of the last 1099 change does not make it seem likely.

Coop grain 1099's are unique to them, because of a tax break they can receive by reporting "PUR's" (don't ask, I barely understand)

That said, I think it is a harbinger of things to come for those of us who sell to private companies.

Let's just hope they cut the IRS just on principle. Best would be to go some kind of sales tax or flat tax that completely eliminates or at least greatly downsizes this horrid agency.