As fireworks sales climb briskly, it is amazing to note injuries have not kept pace. 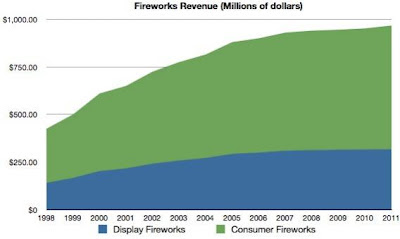 The number of firework injuries, meanwhile, has not increased proportionately. Data from the National Firework Safety Council finds there were 7,300 firework-related injuries in 2008, just slightly up from the 7,000 in 1996.
Elsewhere, the Sunlight Foundation gets into the Fourth of July spirit by digging into the history of firework industry lobbying. Firework makers appear to be a bipartisan bunch, donating “$1,149,280 to Republican candidates and $1,082,834 to Democratic candidates since 1990.”  Nearly all of their donations went to local level politicians, rather than those running for Congress or presidents. [More]


Especially when you witness this:

None for us - absolute burning ban.