Why Bruce was right...

Jan likes Bruce Springsteen's music. So I have heard "My Hometown" a few times. And I could not help but think of the line, "...these jobs are going, boys, and they ain't coming back" as I read these seemingly disconnected news items.

But now Amazon has a new game. Now that it has agreed to collect sales taxes, the company can legally set up warehouses right inside some of the largest metropolitan areas in the nation. Why would it want to do that? Because Amazon’s new goal is to get stuff to you immediately—as soon as a few hours after you hit Buy. (Disclosure: Slate participates in Amazon Associates, an "affiliate" advertising plan that rewards websites for sending customers to the online store. This means that if you click on an Amazon link from Slate—including a link in this story—and you end up buying something, Amazon will send Slate a percentage of your final purchase price.)

It’s hard to overstate how thoroughly this move will shake up the retail industry. Same-day delivery has long been the holy grail of Internet retailers, something that dozens of startups have tried and failed to accomplish. (Remember Kozmo.com?) But Amazon is investing billions to make next-day delivery standard, and same-day delivery an option for lots of customers. If it can pull that off, the company will permanently alter how we shop. To put it more bluntly: Physical retailers will be hosed. [More]

The crucial aspect of this is the impact is in the service sector - not manufacturing. The former is supposedly the sector of the Future for jobs.

Next, jobs in an industry that is a little closer to home for some of us.


But à la carte would blow up television, which has been the most dependable and lucrative business model in modern entertainment history. The Internet gutted the music industry. Print journalism has been forced to innovate or die -- or, sometimes, both simultaneously -- in response to the Web. The American movie industry has survived fundamentally because it learned to diversify away from the terms "American" and "movie industry" -- most of their revenue now comes from overseas and "merchandise-able" franchises. But the cable bundle is still basically the cable bundle, and it is still growing by hundreds of thousands of subscribers a year. Innovation is an answer to a problem. As long as cable providers don't have a revenue problem, they have less need to innovate.

The debate between DirecTV (a provider) and Viacom (a "content" creator) is about finding the right price that providers should pay for content that most people don't watch. That's where bundles are useful. They disguise the price of things we don't use. But with pay TV growth slowing, we're at the edge of a revolution. "DirecTV thinks video streaming is eating away at the ratings of channels like MTV and Comedy Central," Jeff Bercovici writes at Forbes, and the company has "demanded that Viacom give consumers the right to select channels a la carte."
The Aereo story is different. It's not about cable. But it is about distributing broadcast networks online. Once sports fans can get the Olympics and NBA and other shows without a cable package, whenever they want it, it could serve alongside Netflix, Hulu and other services to replace the cable bundle.
The Internet is ruthlessly efficient at stripping cross-subsidies and allowing content to shine on its own. (As Jim Fallows has pointed out, newspapers once paid for international coverage with classifieds and cars. Now, if you want classifieds and cars, you go to a classifieds site or a cars site. Bye-bye, cross-subsidy.) Devices like Aereo combined with cases like Viacom's could be leading to an a la carte model for television. The question isn't really if the Internet's unbundling revolution will visit the television industry but when. [More]

But, this post, while subject to great debate in the econoblogosphere, strikes me as coming close to describing reality as any explanation I've seen. 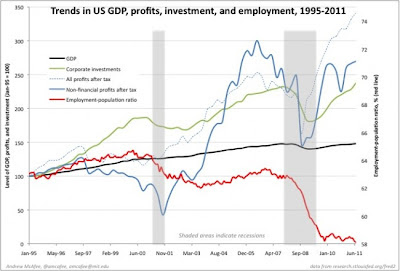 When I look at this graph I see evidence of the computer age everywhere. After the recession of 2001 ended profits came roaring back and equipment investment eventually started ramping up sharply, but the employment ratio increased only between September of ’03 and December of ’06, the most frenzied time for both the construction and financial industries.
And since the Great Recession officially ended in June of 2009 GDP, equipment investment, and total corporate profits have rebounded, and are all now at their all-time highs (non-financial profits are near their historic high). The employment ratio, meanwhile, has only shrunk and is now at its lowest level since the early 1980s when women had not yet entered the workforce in significant numbers.
So current labor force woes are not because the economy isn’t growing, and they’re not because companies aren’t making money or spending money on equipment. They’re because these trends have become increasingly decoupled from hiring — from needing more human workers.
As computers race ahead, acquiring more and more skills in pattern matching, communication, perception, and so on I expect that this decoupling will continue, and maybe even accelerate. This doesn’t mean that companies are about to stop hiring altogether; there are still plenty of things that humans alone can do. But it means they’ll need to hire at an ever-lower rate, compared to how quickly they’re growing, making money, or buying equipment. Because America’s working age population will continue to grow for at least the next few decades, I predict that the employment ratio will not start to trend upward in the coming years. If anything, I think it’ll decrease. [More]

It is clearly reasonable in our subsector (cash grain). We're replacing people at an increasing rate matched by our acquisition of technology. When we can have one guy monitoring 2-3 field machines, it will be obvious, but our current self-deluding pseudo-stats about "jobs that depend on ag" help us to imagine this isn't happening.

More importantly, there is no political solution to this trend, I doubt. Pretending there is leaves us without any plans for adapting to it.

A la carte USFR on agweb is the only way I can get my Phipps phix if I visit my folks in the Chicago area with Comcast cable. Thankfully, the agweb video format seems to view better than it used to. Although they offer a video to just the Baxter Black section, a similar option for John's World still does not exist!