In speeches this winter, I often mentioned the prediction that natural gas would pass coal as our primary electricity source by 2016. I had to move it down from 2019 due to new projections.

It appears I was still a little off: 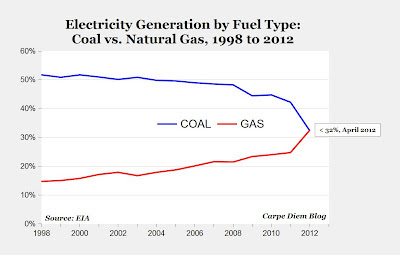 This is breathtaking speed for conversion. I don't think we know what it ultimately means for our economy and culture. For agriculture, I wonder what freeing up all those coal trains could imply for grain movement. I was often told out West that grain got short shrift because coal was so much more lucrative to move.

Or it could be they will head west to move the coal to China, instead.