I think the HFCS market is slip-sliding away, but I did not see the downtrend in soda consumption becoming as pronounced as it has. 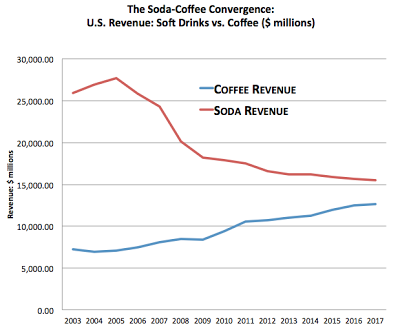 Now look where we are: Soda is in a free fall, with domestic revenue down 40%. Coffee culture is ascendant, up 50% in ten years. In another decade, the United States could easily spend more on coffee than soda -- something utterly unthinkable at the turn of the century (industry data via IBISWorld) [More]

Like so much else, it is driven in part at least, by generational differences. And when Coke tried to staunch the bleeding with a 2-minute commercial, it did not impress much - in fact. it may have hardened anti-sugar positions.


This explains why the reaction to the commercial was immediate and derogatory, even in the advertising community. “Critics Jeer Coke’s Entrance Into Obesity Discussion” read a headline in a MediaPost blog. “The soda giant makes an awkward first stab at addressing obesity,” said AdWeek, which called the video  “shameless.” Among food and health writers, the response was mocking, perhaps best represented by Marion Nestle’s “Coca-Cola Fights Obesity? Oh, Please.”
...There is virtual consensus that drinking too much soda is bad for you, and it’s not hard to understand the evidence. I asked Rob Lustig, a pediatric endocrinologist at the University of California, San Francisco, and the author of “Fat Chance: Beating the Odds Against Sugar, Processed Food, Obesity, and Disease,” if he’d sum it up for me. His response: “A calorie is NOT a calorie. Different calories have different metabolic fates in the body.
Those from fructose overwhelm the liver, forcing the pancreas to make more insulin and driving more energy into fat cells. And soda is nothing but a fructose delivery system.”[2]
Soda is a fructose delivery system as tobacco is a nicotine delivery system. (And if it’s not “truly” addictive but only habit forming, so much the better; it’ll be that much easier to get people to cut back.) That’s why added sugar, especially in liquid form, is rapidly becoming the focus of savvy public health officials, scientists, physicians, journalists, parents and even politicians. And the ridiculous notion that government has no role in public health — the blind “nanny-statism” argument, which ignores everything from seat belts to tobacco to guns — is being overwhelmed by the tide of evidence, as demonstrated by a recent poll by The New England Journal of Medicine, in which 68 percent of nearly 1,300 respondents worldwide “favored government regulation of sugar-sweetened beverages." [More]

These are charges that may be more definitely proven, but if we have learned nothing else from GMO's, climate change, etc., it's that public perception doesn't wait for replicated studies or respect scientific consensus when it suits them.

There is some kind of synergy I think developing with social media, search engines, economic discontent, and anti-consumerism that could rebuild our food system. From meat to drink, a growing number of people aren't just eating what's set in front of them.