Somehow amidst all the doomsaying and predictions of collapse (especially if Obama was re-elected), a funny thing happened. Equities plodded along toward a quiet boom.


One of the biggest trends underlying the strengthening of the U.S. economy has happened so gradually, and with so little discussion, that it was easy to miss. But facts are facts, and while many people didn’t notice it, the U.S. stock market has been on an absolute tear, rising back to near its pre-crisis level.
Tuesday was a typical day in this long rally, which has proceeded with only a few interruptions since March 2009. The Standard & Poor’s index rose 0.4 percent, enough to make Americans’ 401k accounts a little bit more flush, but not dramatically enough to prompt any outpouring of celebratory confetti or even a hint of the bubble-era mentality that flourished in the late 1990s (The TV ad for a brokerage in which a tow truck driver hit it rich day trading is but a distant memory). 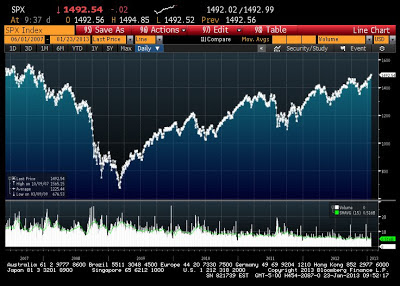 The Standard & Poor’s 500 is almost . . . all . . . the . . . way . . . back
But add up those days of 0.4 percent gains—there have been a lot of them in the last four years–and it is a remarkable run. Tuesday’s close left the S&P only 4.6 percent below its all-time high in October 2007, meaning it could enter record territory after just a couple more good days. We are living through the strongest stock market rally since the late 1990s–though this one has far, far more solid fundamentals underlying it.
The rise is a major, major reason that Americans’ household finances are looking better. [More]

Ezra nails it, I think. The climb has been so relentlessly boring it hasn't attracted the attention it deserves. But, giddy optimist that I am, I think this is pretty damn good news. What we didn't need is more volatility and skyrocketing share values. This pedestrian recovery gets more solid every moment.

While I don't think the "wealth effect" will be infecting households anytime soon, there will be a relief from economic anxiety in stages. Adding to this anti-apocalyptic sentiment is news like this.

ISO New England said Wednesday that electricity prices are now at their lowest levels since 2003.

The lower wholesale prices don’t necessarily mean quick drops in monthly power bills. Utility regulators in the six New England states set retail rates in advance, and because the rates are in place for intervals of months or years, the lags between drops in wholesale and retail prices can vary.

But since the ISO expects the trend of low recent natural gas prices to continue, the savings should be coming.

The driver in the falling wholesale rates is a 20 percent decrease in the price of natural gas, New England’s dominant fuel for electricity production. The ISO said the region is benefiting from stepped up production from the nearby Marcellus Shale field in New York and Pennsylvania.

But lower electricity demand — due in part to the economic downturn, milder weather and better energy efficiency — also has pulled down prices, according the ISO. [More]

Just like the combination of more efficient cars, different driving habits, and Bakken has, and continues to reshape our energy burden, analogous trends all over our economy are turning the curves we all thought would extend to unsustainability. These fruits are just beginning to ripen. There also considerable knock-on benefits from each one.

I am not convinced this is bad news for commodities, either. Sure, fast money fueled some pretty spectacular spikes, but there is still plenty of wealth to wander into our markets from time to time. Maybe fundamentals will be able to exert slightly more influence, which would certainly make them a little easier to comprehend.